When Wemyss Malts name a whisky, they are not hiding behind any marketing BS. They tell it like it is. One of the three staple releases of the blenders’ core range is the Spice King, and here we were able to sample the second batch strength release of that blend. The whisky is comprised of single malts from a series of undisclosed locations, which have been picked for their oaky and spicy characters, and then finished together in sherry hogshead casks. The final batch has then been limited to 9000 bottles and is presented without chill-filtration at 58.0% ABV. A full size (70cl) bottle will look to set you back £46.95 (RRP) and with such a name to live up to, when being released time and time again, have the blenders got it right…? 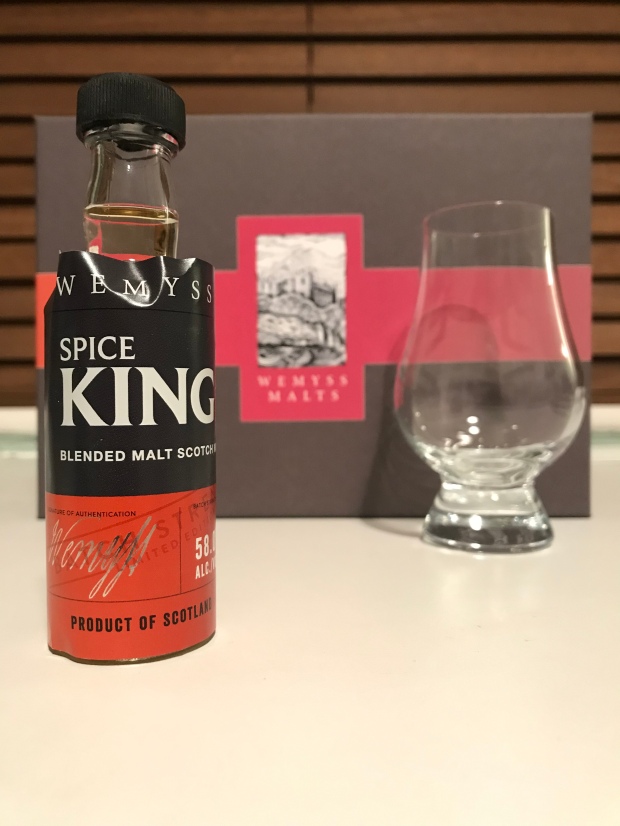 It is sweet and fiery in equal measure, like a fiery ginger cake. So sweet and coating in fact that the 58% is totally hidden and doesn’t sting the nostrils at all – Sex Panther it is not. Speaking of Anchorman though, this does have those classic, sophisticated whisky tasting notes of many leather-bound books and rich mahogany, making it more Ron Burgundy than Brian Fantana.

Yep, its a Jamaican ginger cake for sure. Ginger spice, cakey sweetness and a flash of sweet oranges and raisin juiciness. A touch of wood smoke starts to appear here too as time does its thing but then BOOM! Then comes the oak! Lots of it.

The pure booze only really makes itself known on the finish, but its still quite muted for something over 50%. That said, it is still damn peppery and spicy on the finish. I guess their naming convention is on point! That raisin note from the start starts to re-appear afterwards and leaves a genuine mouth-watering sensation. A bit of an astringent, boot polish kind of note lingering on the tongue afterwards.

With so many flavours going on you’d ordinarily be looking for a phrase such as balanced or rounded in a whisky review. Not here. What we have here is something that is imbalanced. Purposely so however. As the name suggests, the spice is king here. The fruity flavours are delicious but then the oaky spice takes over just as you get to enjoy them and carries on through to the finale. Being honest, the oaky spice is not the feature that I would solely go for in a whisky and it usually acts as a pleasant supporting character in a whisky profile ensemble. If spice is what you are after however then bring your cape and sceptre because the king is in the court.

Sample disclosure: This sample was received as part of a Tweet Tasting event to promote the release  of ‘Batch Strength No.2’ releases of the Wemyss Malts core range, and the launch of their new cask club, with “Smoky Nectar“. Despite the promotional sample, all notes here are intended as a fair, honest and independent review of the whisky,