Since 2005 the Wemyss family have been crafting a series of blended malt whiskies with great success. The family-run business have used a rolling team of blending experts, including industry icon Charles Maclean, along with their own senses to create a solid output of blended whiskies. The core range of blends, features a trio of tipples each with their own unique characters; The Hive, Spice King and Peat Chimney. The whiskymakers don’t simply pick and choose samples, but also mature their own stocks on site so as to create a range of sources for their regular outputs (also including the Family Collection of Vanilla Burst and Treacle Chest), the occasional limited edition releases, and, where a single source has been deemed to be of sufficient quality, a single cask release. The whisky featured here is the latest iteration of the single cask releases, but also represents Wemyss Malts’ first release in their new Cask Club – a new series of releases to be made available solely to members of the cask club.

The first release looks to keep with tradition by still carrying one of Wemyss’ signature descriptive titles: Smoky Nectar. The selected cask is a hogshead of Caol Ila single malt whisky that was originally filled in 1983 and was bottled in 2018 ready for the Cask Club launch – resulting in a total yield of 211 bottles – bottled at 46% ABV and available to club members at £296.95.  Without further ado… let’s see how smoky and nectar-like this is…. 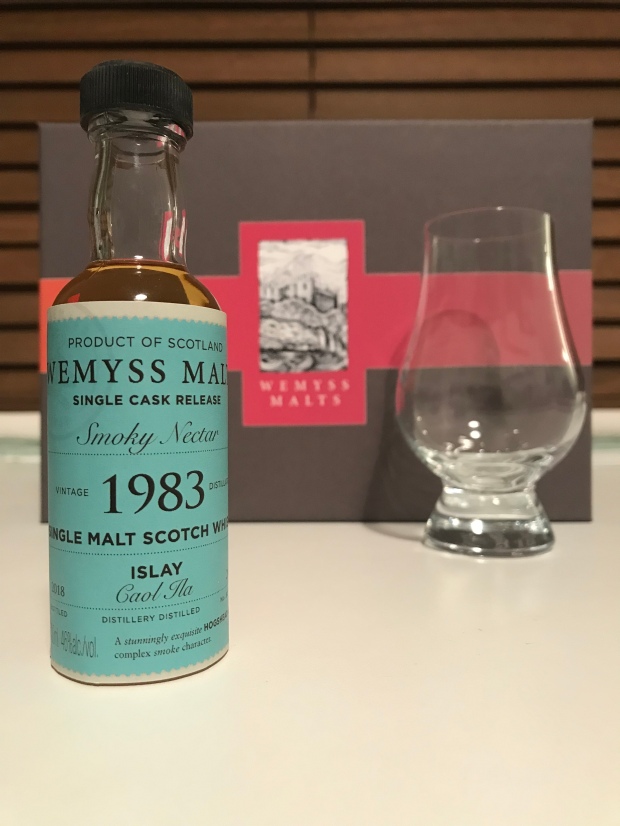 An incredibly sweet peat at first whiff here – almost like candy floss. Don’t get me wrong, the smoke is there, but wow, these light sweet and fruity flavours just unfold.

Despite preparing myself for a rush of peat just due to the name and the fact that this is Caol Ila, this is surprisingly light. A series of delicate fruity flavours just keep revealing themselves: kiwi fruit, lychee, lemon and orange fruity flavours all just bursting to get out. The fruits are all supported (and not hindered) by a muted smoke. There’s a really nice and briny aftertaste to stop this from being death by sweetness too. There’s even a strawberry jam element to this.

Very drying finish. Like having sucked the sea spray-battered stave that this whisky has presumably come from. Oh but to be able to do that. The lasting sweet fruits however, point to the team having come up with yet another perfect descriptor for their whisky: smoky nectar.

It is such an odd sensation to taste a peated whisky this old and to still only be getting these light fruits which have only really been tempered by the smoke. The smoke is more akin to a smoked fish, rather than a peat bonfire. The smoke (which would ordinarily be the first thing I would be looking for and enjoying as a peated Islay whisky) is playing the supporting act here. Presumably that is the real implication of the 35 years that this has been maturing, where the barrel has taken on the real legwork, but the balance works really well here and is a stunning little whisky.

Just prior to tasting this whisky, I had actually received an email with the invite to the Wemyss Cask Club, having been on their mailing list for some years, and was a bit confused by the proposition of the whiskymakers offering exclusive access/sale to their single cask releases – given that they have single cask releases already available, and their substantial collection packages of multiple whiskies offering similar features (e.g. the Smoky Collection). I guess the intention is to build on an existing sense of brand loyalty or even create a new one for their choice cuts.  What is not clear, given that this is just the first roll of the dice, is whether or not each ‘exclusive’ offering will look to cost ca. £300 of your hard-earned cash, and, if so, then it is something that we at WU Towers can ill afford at this time. To be fair, we’ve seen similarly aged single cask bottlings of Caol Ila for £500+ from other sources, so it does seem a fair price for what it is and for those with pockets deep enough. Perhaps a club with some 50ml, 100ml or 200ml regular releases would open up to a broader market, but for now, this little Caol Ila is a fine example of an indie bottling and another sign of good things to come from the Wemyss team.

Dram Disclosure: This sample was received as part of a Tweet Tasting evening co-ordinated by Steve Rush @TheWhiskyWire in co-ordination with Wemyss Malts as a promotion of the second release of batch strength core range whiskies and the launch of the cask club. All notes are drafted as an honest, unbiased, independent and fair review of the whisky.