In 2017, Wemyss Malts released the first limited edition batch releases of their 3 core range whiskies.  The smokiest of these offerings is named the “Peat Chimney”, following the blended-maltsters’ pattern of two-word monikers for their whiskies. Following the success and sell out of the first batch, in early 2019 a second wave of the batch strength releases (note: not cask strength) has been unveiled with the self-explanatory title: Batch Strength – Batch 002. The blend of malts has been captured here at 57.0% ABV and is now available from Wemyss directly at RRP £48.95, and is limited to 9,000 bottles. The blend of peated malts have been married and finished in a Sherry Hogshead to provide some extra tannic spices and additional depth to the blend, though the exact malts that have gone into this blend remain their guarded secret. 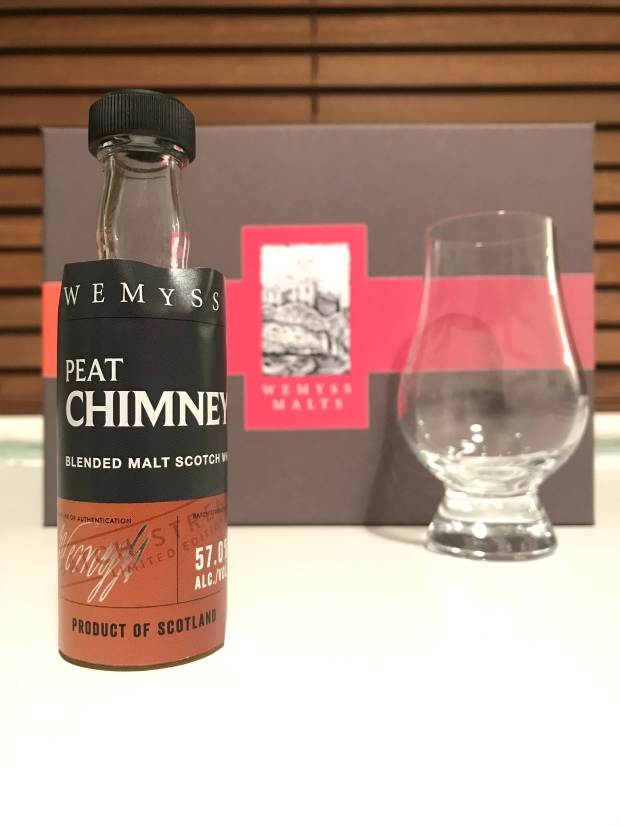 Well, unsurprisingly there is an instant hit of smoke as the glass approaches the nose – you can smell it before its even next to you. The smoke is quite distinctive too. It reminds me of a smoked kipper type of smoke too – rather than the fish itself – although one fellow tweet taster noted that they could smell prawn cocktail!!! On the note of crisp flavours though, the smoke is reminiscent of smoky bacon flavour. Who’d have thought that you’d get a whisky that makes people think of Skips and Frazzles, the champions of school break time snacks!Anyways, back to the proper tasting notes and there’s a nice little maritime smell to it too, giving it an extra bit of a coastal feel that peatheads will truly savour.

There’s a touch of lemon zest, a little malt and a little sea salt in here amongst the smoke but it is all about the interplay with the peat here. The ‘chimney’ reference is spot on as there is undoubtedly peat at play but an equal dosage of wood smoke flavours in the melee too.

The oaky and peppery spice muscles in on the show now, but that sweet smoke really does linger and even comes back to get you after you’ve finished it, on second and third breaths after swallowing. Sneaky.

Lately, my experiences with the higher ABV whiskies (anything 50%+ really) have been hit and miss when it comes to flavours vs power and the need to regulate the whisky with water, but this whisky stands on its own and doesn’t really need taming at all. Sure, the lemon zest flavour starts to become a bit more apparent and even a honey-like texture and sweetness appears with a dash of water, but for the unadulterated dram, this chimney can keep comfortably smoking. It was perfect for the long winter evening when I first sampled it too. Maybe it’s not quite right for a more summery night, although if you like your drink to taste like your nearby bonfire late into a summer’s night, then this could be the one for you. It would certainly keep you warm too as the evening cools down. This whisky tips the balance for me in favour of being at a higher strength and it certainly doesn’t strike you as a 57% hit of alcohol. In fact, neither the level of alcohol, nor the levels of peat smoke, are really blowing my head off here. Sure, its’ giving me bit of a nudge, but this is tempered well. It also makes me appreciate and want to explore peated blends, where the different types of smoke mingle with one another to give a more three dimensional smoky experience. It may not be one to have multiple glasses of in one night, unless you want to become quickly reacquainted with floor, because that booze will catch up with you, but overall a solid smoky sipper.

Sample disclosure: This sample was received as part of a Tweet Tasting event to promote the release  of ‘Batch Strength No.2’ releases of the Wemyss Malts core range, and the launch of their new cask club, with “Smoky Nectar“. Despite the promotional sample, all notes here are intended as a fair, honest and independent review of the whisky,