Despite the fact that this post relates to a new series of blended malt scotch whiskies, the origins of the whiskies actually start with a single malt whisky distillery under a new vision from 2017, originally built in 1967, a Victorian inventor and distiller, and an even older, traditional Hogmanay greeting.

To go back and start at the beginning then, the phrase ‘Lum Reek’ comes from the traditional blessing of “Lang May Your Lum Reek” which translates to “Long May Your Chimney Smoke”, i.e. a blessing of good fortune, health and wealth – making sure that you have enough to keep the house warm and the food hot. We’ll come back to the smoke shortly..

Flash forward through the centuries and the next piece in this puzzle comes from te Victorian era. To be specific, the whisky brand here takes its name from a famous Glaswegian inventor, tradesman and whisky-blender, Harvey MacNair. During the 1860s, the blender is reported to have been enjoying a dram after a day of fishing in a bothy near Glenallachie, when the chimney became blocked and he noted the improvement to the whisky caused by the smoky atmosphere. The Macnair’s brand has kept his work alive since he began selling his own whisky wares and has passed from corprorate hand to hand since, along with his smoky profile.

To bring us back to modern times, 2017 saw the MacNair’s property being transferred to The GlenAllachie Distillers. Co Limited, as part of the new company’s purchase of the GlenAllachie distillery. Whilst the good work of the distillery continues to make single malts, on the anniversary of the purchase, revered Master Blender and Co-Founder of the GlenAllachie Distillers Co has created a new modern take on the classic MacNair’s brand with a core release of 3 distinct bottlings: a no-age statement entry release, a 12 year old, and a 21 year old set of blended malt scotch whiskies. All 3 blends are a blend of peated Islay and peated Speyside whiskies, and have been bottled without chill-filtration and at a hearty 46-48% ABV.

A couple of months later, and at the start of 2019, we at Whisky Unplugged were lucky enough to have our names pulled out of the virtual stovepipe hat and were given the opportunity to join a Tweet Tasting with @TheWhiskyWire, the Twitterati and like-minded whisky geeks and writers. Below are our more detailed tasting notes on the three whiskies: 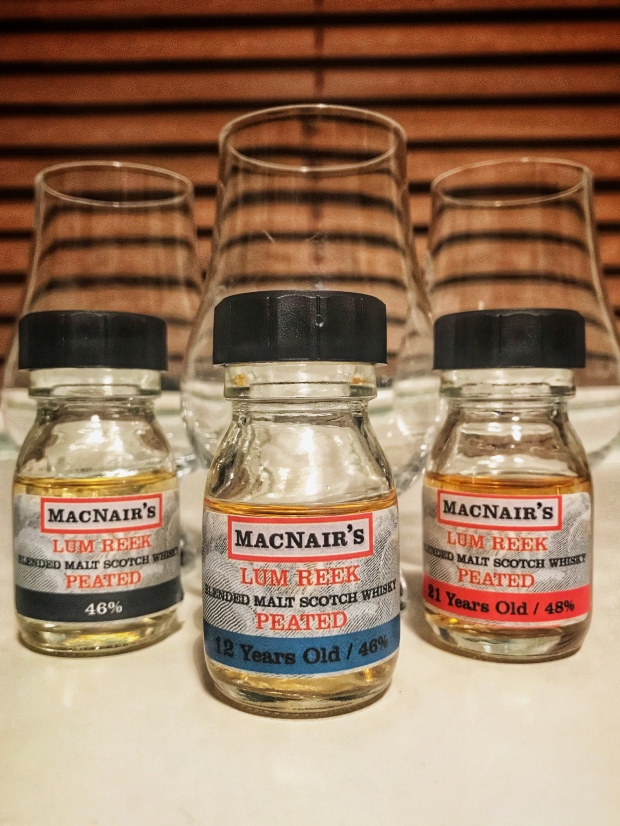 The first in the series of Lum Reek whiskies has been made from a combination of peated Islay whiskies, peated Speyside whiskies and some older GlenAllachie whiskies, which have received their respective components having been matured in first fill Bourbon, Oloroso, Virgin Oak and Red Wine casks, before being matured and vatted at GlenAllachie and captured at 46% ABV. The regular sized bottle is now available at an RRP of £41.95.

Quite a light peat at first. And a soft peat, if such a thing exists? There’s a parma violet tingle and sweetness beyond the smoke, plus a nice, grassy and heathery smell. Despite the peat smoke, there’s a autumnal freshness here too – just like apple picking season (though its probably less romantic, and more like damp wood and apple sweetness). The malt is doing its work too with a good oaty biscuit base. A nice dry bourbon barrel smell of oak to it too. Smoke fades a little with time too and reveals more of a light citrusy note (lemon rind). In short, there’s a lot going on.

Wow, the smoke really takes hold here when it hits the lips. What does it reveal? Maybe my most unusual note yet: bacon! Maple cured bacon at that! That’s the smoke talking. Once that subsides though there’s a nice basket of fruity flavours – lemon rind there but now its a more dominant set of dark berries and raisins. Lovely cereal note to it too. After a couple of sips, I was start to get some of that coffee bean flavour that some of the other tweet tasters had been suggesting too.

Yep, that sensation of the crispy/burnt bits of bacon really lasts here. The overall finish is peppery, firey and quick. 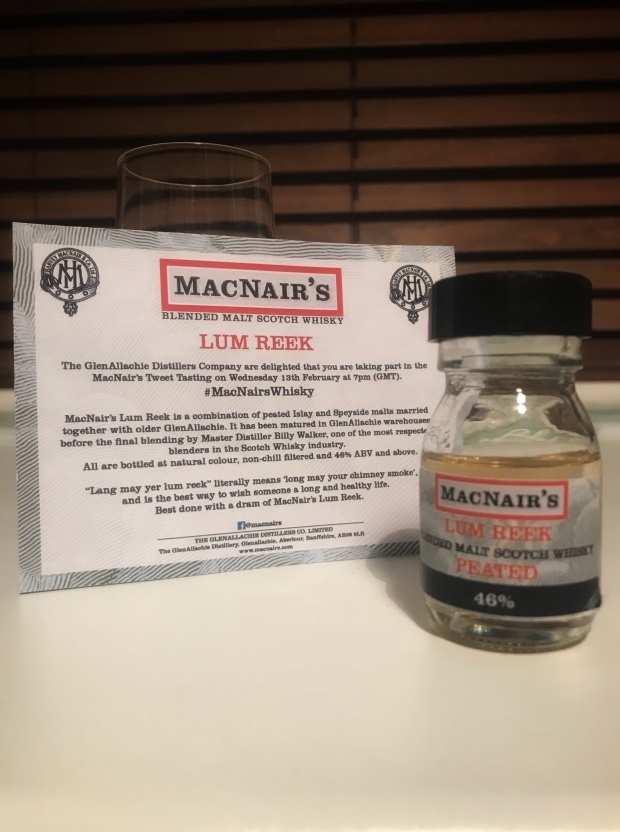 Whilst the distillery will not reveal the sources of their malt whiskies, we know that the youngest component in this blended malt will be 12 years old, and we do know that they have been blended using a combination of whiskies matured in first fill bourbon, red wine and PX casks. The final product is finished and matured in the Glenallachie warehouses before being bottled without chill-filtration, at natural colour and a t a batch strength of 46% ABV. If you are looking to add this to your collection, you will be looking in the region of £49.95 per 70 cl bottle.

This seems to shoot up the nostrils pretty quickly. Nice soft peat smoke at play here (as opposed to an iodine/Laphroaig style peated blast) but it leaves behind a delicious jammy note – strawberry or raspberry you choose. There’s certainly a syrupy sweetness to it. After a little time that initial smoke really subsides and reveals an almost tropical fruit kind of flavour too – pineapple or mango, believe it or not.

The smoke reveals itself much more on the tongue, but once it wafts through the mouth, it still leaves behind the flavours of fresh, zesty yellow fruits – almost like a sherbet dib dab.

That is punchy. Despite the sweeter, fruitier notes on the palate, there’s a white peppery type of spice and pep to it (so to speak). Once the peppery crackle and sherbet-y tingle have both fizzled away, there’s a little ashy smoke left behind.

Like its siblings here, the 21 year old has been sourced from numerous malts which have been matured across a variety of Oloroso sherry, virgin oak and red wine casks, and have been presented without chill-filtration, at the final natural colour, and at the slightly higher proof of 48% ABV. A regular bottle of this 21yo will look to set you back about £125. So.…. is it worth it? Let’s find out…

Wow. This is really waxy. It coats the nostrils with a thick, unctuous sweet and smoky smell. Really takes its time to open up (and why not after being cooped up for 21+ years?). Not surprisingly, oak is the first and overwhelming tasting note. The sweetness then starts to roll out. A really sugary sweetness, at that. Like jelly beans or wine gums.

Pow. Lots of sweetness here as it hits the lips and there is a little burst of peat and heat in there too. That said, it is more about the sweetness and fruity flavours and the smoke is barely present on this – more the suggestion of old pipe smoke / tobacco than any burning embers. With time, it reveals more and more of a pick-and-mix portfolio of sweetness with a nice bit of the dunnage/warehouse tinge to it. On the fruit side of things, think more along the lines of dried fruits. Papaya and little orange bites. A nice, warming ginger cake spice. And a little vanilla – oooh Jamaica cake and custard!

Sweet and a little peppery again – more of that Jamaican ginger cake spice to it. A little nutmeg too? There’s a lot going on, but it all melds together really well.

Above are the individual tasting notes, but how do they fair against one another in a compare and contrast exercise, and which comes out victorious…

You’d have to assume that the cheapest of the 3 features the younger whiskies, and with that, the NAS -whisky is really punchy and much more alcoholic smelling than the other 2 with a far more peat influence. The 12yo appears sweeter, more rounded and toffee-like but really seems to get up the nostrils quickly, whilst the 21yo develops that further if the 12yo was toffee, then 21yo is more sherbety and heathery, and despite the higher ABV, has the least boozy tingle or nose prickle to it.

It seems that time is the biggest influencer here, with the peat being phased out through time in favour of sweet oaky influence. The smoke on the NAS is purely peaty in profile, with 12yo developing a softer, sweeter peat, and the 21yo having more of a sweet burned woodsmoke profile, rather than peat. You can also see that with time, the number of tasting notes has also increased above. (That and the amount of alcohol consumed might have made the draftsperson a little more lyrical…)

Having saved a little bit behind from each initial tasting, then gone back to the NAS from the 21yo, you realise just how quick and brash the finish is by comparison, though they all put up bit of a fight, to be fair. The 12yo still packs a pretty punch, whilst the 21yo has much more of an oily coating on the throat which seems to keep the fire at bay, albeit, with still an oaky, peppery flash to it.

Overall, there is not a bad dram amongst the trio. Each have their merits, and for a whisky range whose name refers to chimneys smoking, the NAS actually has the most smoky influence to it, with the 12yo showing more of a balance between smoke and oak. The 21yo tasting notes just rolling as the age and influences took their time to reveal themselves. On the night, I split it down the middle though, preferring the 12yo’s balance between the other two’s stronger suits. Having recently been enjoying some midwinter peaty players, I’d then choose the NAS over the 21yo. The 21yo’s higher fruity flavour profile would be better suited to spring/summer. Like I say, not a bad one there though, and Whisky Unplugged is the winner overall!

And if you’ve enjoyed this article (and made it this far) then “Lang may your lum reek!”

Dram disclosure: As noted above, these whiskies were received as part of a Tweet Tasting event organised and hosted by @TheWhiskeyWire in conjunction with The Glenallachie. All notes are written as fairly as possible as honest, unbiased reviews of the whiskies received.