It is fair to say that, as appreciators of scotch whisky, a trip to Speyside had got the Whisky Unplugged boys into high spirits (so to speak), and one of the experiences that we were most looking forward to was the cask strength whisky tasting booked in at Aberlour. At £35 per head, this was one of the priciest tastings/tours that we had booked in, but it proved to be well worth the cost.

The morning started a little sluggishly (more on that in later posts) and after a short taxi ride into the town of Aberlour, we walked up to the distillery and took in some of the brilliant scenery. The first thing that struck me about the visitor centre was that adorning the building’s wall was an old sign stating “Aberlour Glenlivet”. A quick inquiry on the inside revealed that a lot of distilleries in the Speyside area used to take advantage of the Glenlivet’s worldwide successes to try and attract some more attention back in the day, and that they were not actually associated or owned by The Glenlivet. [Our legal eagle amongst us found out that there was once a legal battle which made it mandatory to hyphenate Glenlivet if genuinely affiliated with the distillery….zzzzzzz….] 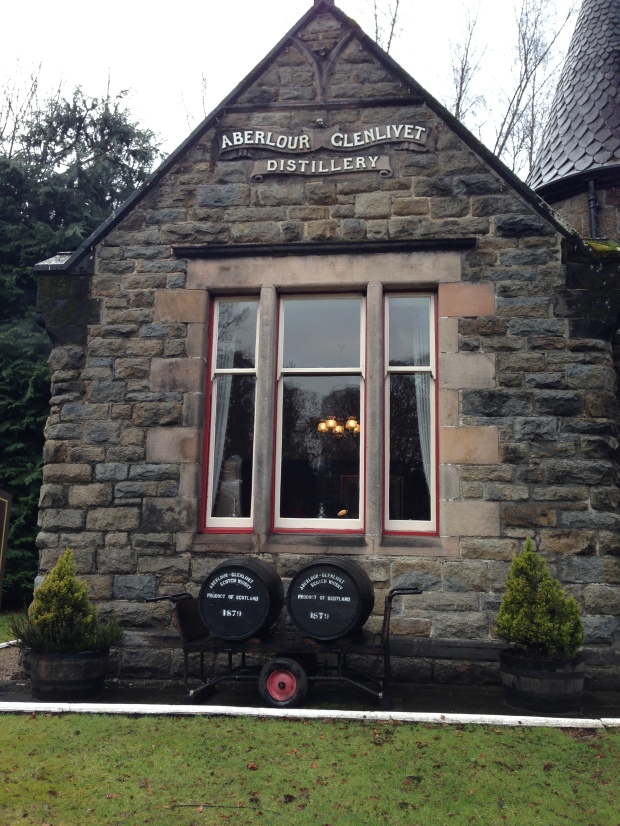 After a quick introduction and escorted trip through the grounds by tour guide and proud Yorkshireman Jonathan, we were treated to a private tasting in their James Fleming suite, which is contained in a converted distillery manager’s house. This was an excellently appointed building with stylish designs and nods to local produce, nature and, of course, whisky. I for one have never seen a bar stool made from antlers before! One of the features was a cased original Aberlour bottling from 1894 and an impressive set of chandeliers made from whisky glasses and decanters.

To the matter at hand, and before us (in front of a giant wall of underlit Aberlour bottles) sat 4 bottles of cask strength expressions, all of which are from within the family of distilleries and stock acquired by current owners Pernod Ricard.

Casks From The Past

First up was a a 37 year old Inverleven – a distillery that is no longer with us and therefore started to warrant the entrance fee. At its remaining cask strength of 49% ABV, this expression is still available in Chivas Brothers’ Deoch an Doras range, and had a really sweet nose. Like candy peel. In fact, it reminded me of the sweet nose that Chivas’ Strathisla 12 has. Despite the alcohol volume this was a really light dram, with light floral notes throughout and had a great balanced finish. Incidentally, the still that made this whisky is now the Ugly Betty still in Bruichladdich that makes their Botanist gin, and there was certainly some light botanicals in this dram.

Second on the agenda was a 15 year old Aberlour expression that had been solely matured in bourbon barrels – rather unusual for Aberlour as they usually mature or marry their releases with sherry casks. The results were a very light nose with apple sweetness and the smell of cut grass (the power of suggestion from our guide taking me on that one). The taste was punchy and full of vanilla from the first fill bourbon barrels, but not as punchy as you would expect for 53.7% ABV. The finish was fairly quick and sweet but had a very more-ish quality. 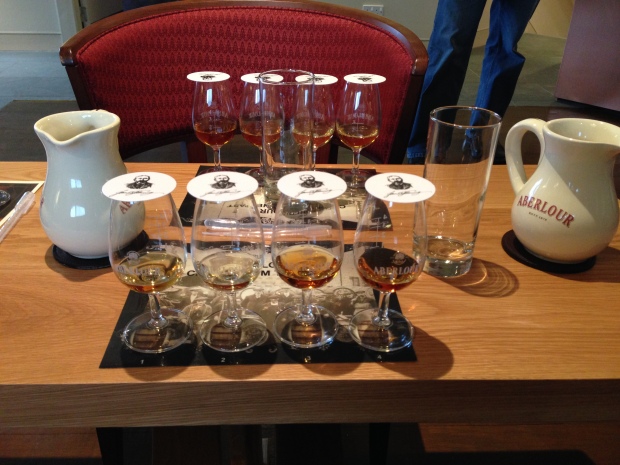 Drams From The Pasts

Third up was bit of a treat, as our little group became Aberlour’s guinea pigs for the day, as we became the first people to commercially taste their newest release – a distillery exclusive release – a 17 year old marriage of first fill oloroso sherry cask and first fill bourbon. Despite being slightly older than the previous dram, this packed in a bit more alcohol, notching up to 55.3% ABV, and had a very, very full sherry nose, with a strong fruitcake smell. The taste was also fruity but needed quite a bit of water to open up the fruit flavours to counter the alco-burn. The sherry concluded the story on the finish too and this was a slightly sweeter dram when compared to their all-sherry matured A’Bunadh releases.

The last of the drams of the day’s experience was another release from the Deoch an Doras series – which literally translates to “dram at the door”, or more colloquially “one for the road” – which was a 30 year old Glenugie. This is another lost distillery, having closed in 1983, and that seems such a shame as this dram, at (the very accurate percentage of) 52.13% ABV, was a delight. This also featured a very strong fruitcake nose, courtesy of the first fill sherry casks that the whisky had only been matured in, but unlike the other drams, this had hardly any sting and coated the throat as it went down – almost medicinal – with those strong currant-like flavours continuing throughout.

Overall, the morning (yes, morning!) and experience was great fun, and that was greatly helped by the healthy drams and good compere work from Jonathan. A little inebriated, very merry and totally enamoured by the 15 year old release (bottle #2), we proceeded to a separate room to fill and sign our own bottles – completely suckered by the marketing move here – and we bought up bottles 368-370 of the bourbon-only Aberlour release. Unfortunately the device was on the blink so we had to take something that had been filled by hand that morning, but the wooden presentation box was a nice touch and now sits very prettily in my whisky cabinet. Next up was lunch at The Mash Tun for a debrief and whisky geek out…

One thought on “Aberlour – Casks From The Past”