In 2017 the team at Highland Park wanted to release a whisky which displayed their master distiller’s skills and create something different to the standard HP playbook that we have come to know and love. The trend to be bucked was the use of sherry casks, and the release of Full Volume represents a limited edition bottling of 100% ex-bourbon barrel matured HP spirit. The marketing draws on the comparable skill of musicians to best understand all elements of their kit, along with displaying a skill in mastering those components too. Bourbon maturation, therefore seemingly being compared too the amps, pedals and cables to the sherry cask guitar enthusiast.  The whisky itself was laid down in 1999 across 481 casks – 200 litre barrels and 250 litre hogsheads – with the HP spirit that was cut at strengths of between 63.6% and 63.7%ABV. The final product has been captured at 47.2% ABV and the 18 year old single malt has been presented in a very effective Marshall amp stack style, with its tasting profile characterised as the controls on the amp. 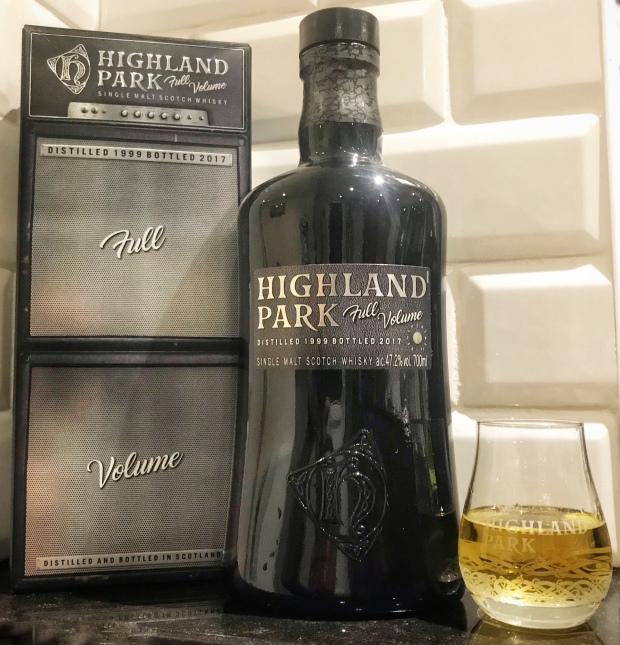 The instant sensation here are the smells of quite a fresh and straightforward whisky. The smells are very similar to the raw ingredients experienced at the distillery: there’s a straw-like/grassy aroma, more like a grist, with a vanilla and clean oak. It is such a pure grist-like and sugary smell in fact that it’s like a an alcoholic barley sugar (the boiled sweet).

That ex-bourbon sweetness and clean white sugar and vanilla is front and centre and cranked up to 11, as it were.. The alcoholic tingle really brings about a zesty lemon flavour into the mix too. Like biting into a lemon. And even catching a bit of the rind – though that note might just be taking the pith. Bad jokes aside it is certainly palette cleansing! Maybe even a little hint of pineapple to it too, though it may just be that this whisky is making me think of numerous yellow fruits. That said, the fruits are very much in the supporting roles or (to stay on brand) playing the rhythm, whilst the bourbon-vanilla profile takes the lead.

Quite a firey finish there – the 47.2% really comes alive here with a sherbet-like fizzy flourish on the finale. Only then does the light, heathery peat of HP’s signature peat dried malt and smoke truly reveal itself on the final breath.

As an HP fan who has had the luck and opportunity to try numerous of their expressions (see notes here), this felt like a great opportunity to try something different from HP i.e. a whisky that is solely bourbon matured. It seems a bold move too, given that HP’s marketing is very much focussed on the importance of its sherry casks. It’s almost like trying just one half of the tale. Having had the chance to see that full picture (rather than full volume) for an 18 year old single malt scotch this whisky is good but it does not really reach the heights of the regular HP18. To be fair though, the regular HP18 does stand in a league of its own, and what becomes apparent from this FV whisky is that the sherry maturation within the final melting pot really balances out the fire and straight talking that the FV has to offer. For me, the gimmick of full volume and the carton’s Marshall stack appearance was… well… I fell hook, line and sinker. I know that I shouldn’t have, but I did. I’m a rocker and metal head through and through and I could not resist the draw of a different 18yo HP branded like a Marshall stack. Plus, I wanted a memento from my visit to HP that wasn’t readily available elsewhere – the Orkneyinga being the other choice – and the sample instore tipped me over the edge enough to loosen the purse strings for once. Its personal taste after all. Since then, I’ve cracked it out on a few occasions now and it always go down a treat. Overall, this a fully amped up bourbon cask matured whisky, but maybe one better suited to the HP enthusiast. 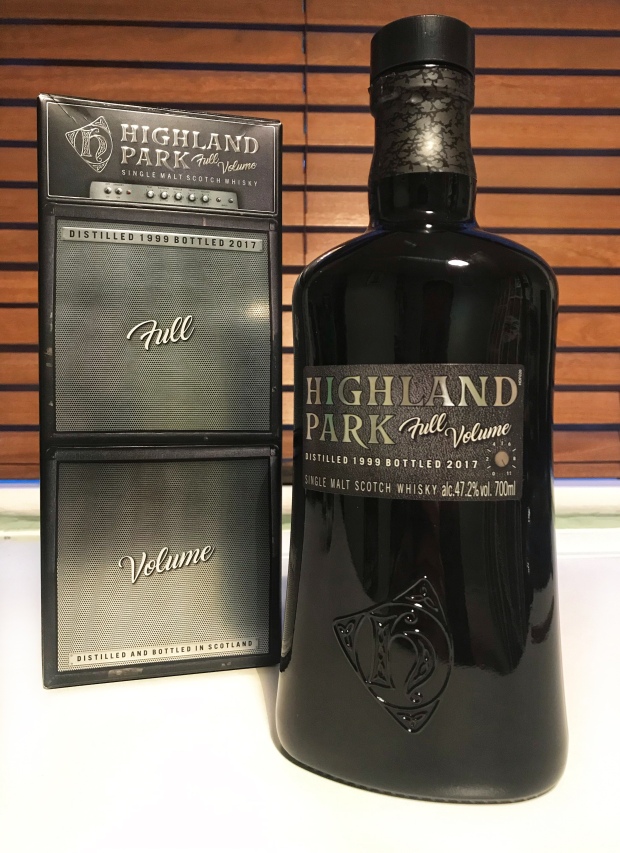 A Very Different HP 18yo

Sample disclosure: This bottle was purchased directly from the Highland Park distillery on Orkney. All notes are intended as a fair, honest and independent review of the whisky.