Over a year ago now, back in June 2017, our friends at Old Pulteney reported that they would be discontinuing their much loved 17yo and 21yo expressions by mid-2018. Since the announcement, stocks of the 21yo quickly ran out though you can still get your hands on the last bottles/cases of the 17yo if you are lucky – and we would recommend it if you can! (See our notes on the old range here)

To tide us over – so to speak – the coastal whisky makers released a couple of special expressions with big age statements in September 2017 – a 25yo and a ‘1983’ vintage – with promise of a new core range in the future.

True to their word, on 1st August 2018, the “maritime malt” makers revealed a stylish teaser that “Our New Fleet Is Coming” along with a promotional offer to win one of the new range. (Fingers crossed!) The image shows a carefully shadowed set of the 4 newly labelled bottles that would constitute their revamped core range, but giving no secrets away about their contents.

Skip forward two weeks of whisky geek excitement and speculation (based on an image alone, remember) and the big reveal finally comes on 14th August 2018: the new Old Pulteney core range contains a 12yo, a 15yo, an 18yo and a no-age-statement bottle named “Huddart”. 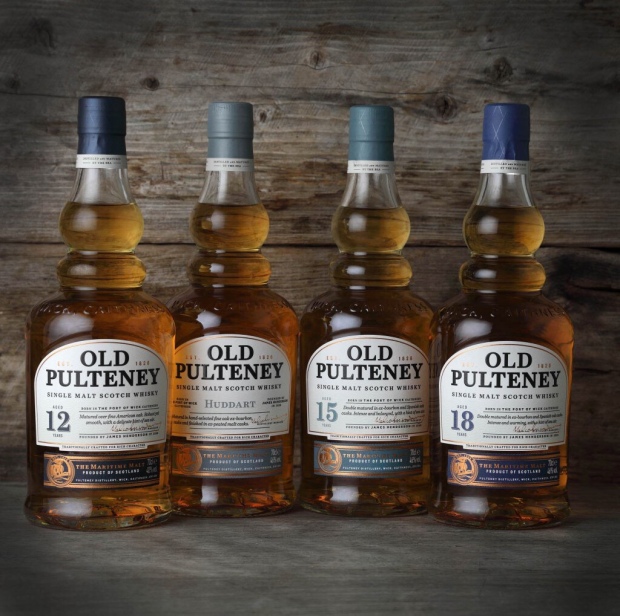 Whilst the whisky bottles themselves have retained that distinctive still shape synonymous with the distillery, the branding and stylings of the packaging seem more befitting of current times, i.e. a modern nod to traditional, artisanal craft, across a grey-blue-green palette, whilst all whiskies are presented at 46% ABV.

But what is said of the whisky itself? Well, the first thing to state is that the 12 Years Old expression remains the only constant here and hopefully the recipe remains untouched as it is a regular, go-to tipple within the WU team here. The new-look label notes that it is “Matured over fine American oak. Robust yet smooth, with a delicate hint of sea air.” The marketing suggests that it will also keep its current price bracket around £32 per bottle, meaning that it can still be a regular feature in the cabinet. So far, so good! Glad to see you back aboard!

Next up in the revised range, if we follow the pricing – and maybe the ageing?! – is the NAS release “Huddart”. This is named by after the street that the distillery sits on – Huddart Street – and promises to be “Matured in hand-selected fine oak ex-bourbon casks and finished in ex-peated malt casks.” Tipped to be sold around £45 per bottle, this is an exciting prospect from the Pulteney team, as the keen whisky-eye will note that this is a peated release. Or at least, finished in formerly peated whisky casks. We believe that a delicate smoke would really complement the seaside salty character that OP is known for and we can’t wait to try this new shipmate.

Third in the range is the new 15 Years Old expression. Presumably this is the replacement to the 17yo, and is marketed as being “Double matured in ex-bourbon and Spanish oak casks. Intense and balanced, with a hint of sea air.” Therefore this new whisky will be fully embracing the maritime malt element whilst delivering a more robust body and fruity elements that the older Old Pulteney bottles used to carry in spades. The 15yo will be initially available at an RRP of £70, and so starting to stretch the purse strings for your fine malts.

Finally within the new core range will be the 18 Years Old bottling, which again promises the continued briny theme via “Double matured in ex-bourbon and Spanish oak casks. Intense and warming, with a hint of sea air.” Whilst this synopsis does not seem to differ too much from the new 15yo’s summary, the official tasting notes and the darker hue seem to suggest that the extra 3+ years of maturation offers more of an oaky, spicy, chocolatey and intense experience, which seems quite the contrast to the old 21yo’s more subtle and light feel. As the top end release within the range, the coming of age dram will be initially available at an RRP of £115.

We think that this new range makes for an exciting time in the distillery’s history and seeks to bring their profile forward whilst respecting their heritage and achievements of the past.

Whisky Unplugged are booked-in to visit the Pulteney distillery in October and cannot wait to experience the new fleet on-site and served as intended: with good friends, hunkered away amongst the elements that have comprised these exciting new whiskies.