Two weeks ago (June 2017) I saw a tweet recommending that people (with deep enough pockets) should snap up bottles of Old Pulteney’s 21 years old expression as it was due to be discontinued. Whilst distilleries are often changing up their releases, the 21yo has been a staple Old Pulteney release for some time and, as their marketing reminds us, won the coveted title of being Jim Murray’s whisky of the year just a few years ago in his 2012 edition of the whisky bible. I was a little dubious to say the least. 24 hours later, not only was this discontinuation confirmed by Old Pulteney, but it was also confirmed that their 17 years old expression was also being discontinued. Shocker!

Old Pulteney have confirmed that whilst these aged expressions are due to disappear – with the 21yo disappearing straight away and the 17yo running out by mid 2018 – they will be looking to replace them with similarly aged whiskies. Maybe they’ll go for the more traditional 15 and 18 yo releases? Maybe 15 and 20? Presumably the decision is based on shortage of supply and all the liquids going towards maintaining the sales of the younger more affordable and higher demand expressions. What I hope they do not do however – and I doubt that they would – is compromise on the flavour profiles. With that in mind here are some quick fire notes on a recent Old Pulteney vertical tasting, including the two departing drams.

OP Navigator: I should start off by saying that I’m not really going into this blind and with a regular OP12 sat in the whisky cabinet, there are some expectations to be met. That said, there is some sweetness and that distinctive OP saltiness to the nose and taste. Vanilla and a bit of spice but not so much in the way of flavour that the other OPs offer but it’s still got that salty fresh taste. Much of a muchness by comparison though unfortunately.


OP17: Sherbet fresh citrus and sweetness hits you straight away. I was expecting the extra 5 years to intensify the flavours but this is surprisingly light but leaves a really lingering flavour. Nominal burn from the booze too. The sweetness beautifully mellows out on the long finish.


OP21: Well this is surprisingly lighter again. More fruity flavours in this – think apples and pears, rather than oranges or bananas! Is there a little smoke in this too? [Wow, the booze must have been setting in by this point!] Not as great as the 17 but still pretty bloody fantastic.


OP35: Maybe I’ll never know. Looming untouched and out of bounds in a cool, if not corny, presentation casket with the ongoing Old Pulteney nautical motif, complete with glass and brass portholes. Maybe one day. 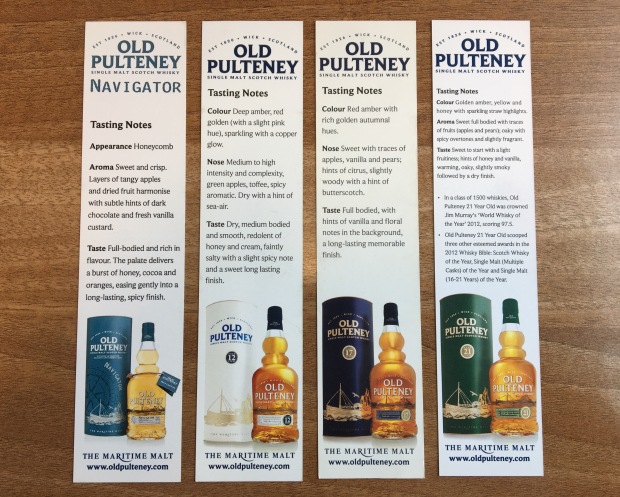 As noted above, I’ve got a lot of love for the Old Pulteney expressions, and whilst somewhat disappointed by the NAS Navigator release, I will be very interested to see what comes in to replace these two absolute beauties. My recommendation would be that you’d best try and stock up whilst you can and keep those fingers crossed for the future…

Edit: Flash forward to the release of Old Pulteney’s New Fleet in August 2018 and our tasting notes on the new core range

One thought on “Farewell to Old Pulteney 17yo and 21yo”