212. That’s the population of Jura. The human population, that is. The people are outnumbered by deer by 30 to 1 on the rugged island, but here we are concerned with the Two-One-Two. Following a fairly recent revamp of their core range and travel retail bottlings, this new release from Jura is being sold as a dedication to the inhabitants of the Hebridean community, with this initial 2019 expression intended to be the first of an annual release under this moniker. So what have they produced then to honour the islanders? Well, this batch of Diurach spirit has been matured for 13 years in American white oak ex-bourbon barrels, before being finished in casks made from Chinkapin oak, a unique subspecies of oak from the Ozark Mountain Range of Missouri. The new expression has been limited to a run of 6,000 bottles and captured at 47.5% ABV. 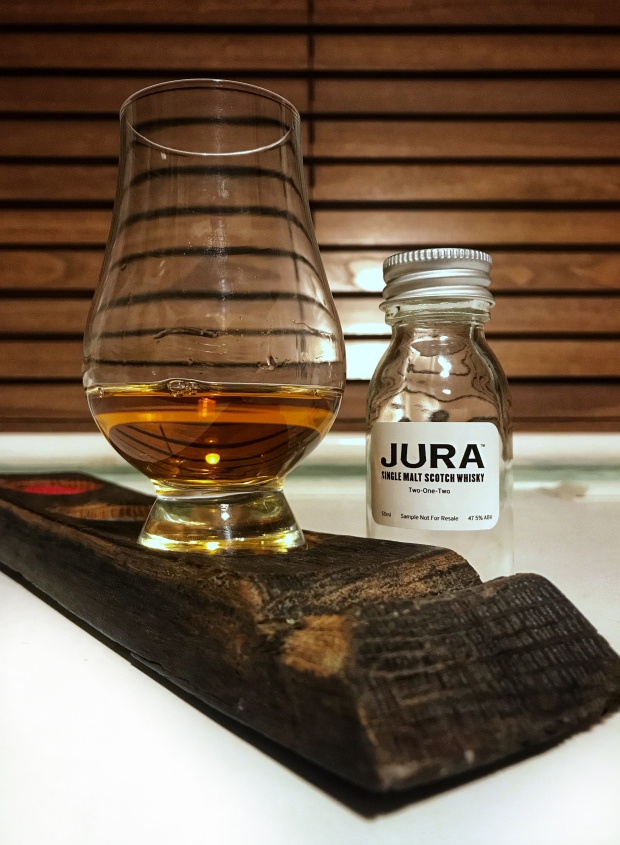 Pow! 💥 We’ve got some big whisky chops at play. A nice ABV blast then a big oak smell to begin with. There seems to be a lot of contrasting flavours and textures here as I write these down: silky milky chocolate but then a dusty, almost sooty, flavour sits in there too – not a smoky smell though – maybe just a strong nutty flavour. As these two flavours ring out there are also some little flashes of fruity zest, like lemon, peach and mango. There’s a good dollop of spice from the oak too, a spice which reminds me more of a rye whiskey than a single malt scotch.

The spice really takes hold here but doesn’t entirely mask the delicious fruit and nut chocolate bar experience. There’s a sweet and tangy orange flavour in there too that kinda reminds me of marmalade on toast!?! The orangey sweetness reminds me of boiled sweets too.

The tropical fruit sweetness and orange marmalade tang is now met with a firey oaky ginger spice as the golden liquid goes down and that spice really lingers for some time afterward.

It seems to have been commonplace and all too easy to bash Jura in recent years following some writers’ negative experiences, but the recent rebrand of the core range and travel retail releases have really shown some true quality and class. Personally, I was quite a fan of their Superstition release. Nevertheless, the shelves have been restocked with a swathe of new releases, so this new single, limited edition release has a lot to live up to, and, to me, it does just that. For those critics who blamed bad barrels for Jura’s old flavours, this seems like a big middle finger, because the cask is king in this one, with oak being at the forefront of the whole tasting profile. The body has a really satisfying creamy/lactose texture to it, but somehow is both light and lingering. Really satisfying stuff but maybe a bit out of reach at ca. £90 per bottle.

Sample disclosure: This sample was received as part of a promotional Tweet Tasting event for Whyte & Mackay using #WhyteChristmas. Use the hashtag to find loads of notes and interactions from the night. All notes here are not intended as promotion but as an honest, fair and independent review of the whisky.