During the summer of 2017, the Highland Park core range of single malt whisky releases went through quite the stylistic rebrand as the Orkney dwellers put their viking heritage marketing into overdrive, with 3 age-stated whisky bottles each featuring some new gnarly embossing, and the names, Viking Scars, Viking Honour, and Viking Pride. Of these revised brands, Highland Park only released one new whisky (with the other two simply being rebrands) into their single malt pantheon but this was to be targeted at mainland Europe, rather than within the UK. The Viking Scars release actually represents their youngest age-stated whisky to date: a 10 year old. The 10 year old has still been through Highland Park’s signature, sherry-led maturation, but with a quantity of bourbon aged spirit to help balance out the flavours. How does this fare against the regular Highland Park core range, you ask? Well, clocking in at 40% ABV, and just £15 for a half-sized bottle from the distillery itself, we’ll tell you… 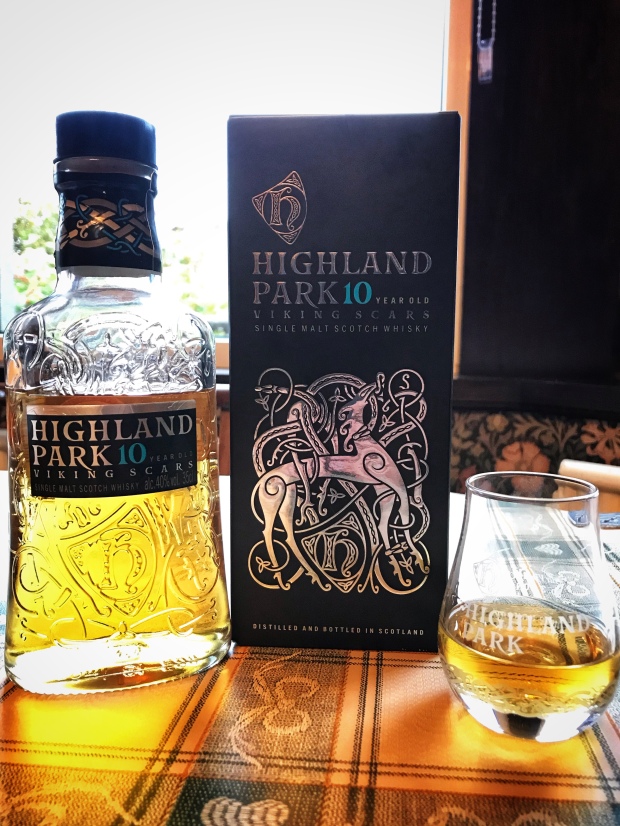 As you would expect, this is very much at the lighter end of the spectrum for sherry-led whiskies, but still demonstrates a flavour profile of what is to come. It has a very floral nose, with a sweetness that reminds us of heather honey. In fact, with a little bit of time, it is very sweet and that nose has a sherbet-like sweetness and nose prickle.

When in the mouth, this little whisky delivers quite a bit of a boozy burst on the tongue at first, but it soon smooths out to reveal that same heather honey from the nose. It feels quite fresh too. Contrary to the preamble, it feels more like a bourbon-led maturation on this, as the light colour and body delivers up more of a vanilla and lemon sherbet sensation. The peaty backbone to this also delivers up more of that heathery smoke, and actually tastes more like a standard “peated” expression of whisky than any Highland Park I’ve had before. Its not an Islay-style sensation of tarry, sea-airdried peat though, but its certainly a more dominant smoke element to standard HP fayre.

That tasting note of heather honey repeats itself again here, but fizzles away with a sherbet tingle and leaves a final tussle between oak spice and peat as the tasting note embers fizzle out. They’re not delivering knockout blows though. Just jostling for your attention. The overall experience ends pretty quickly however. It does leave you wanting more though. Fairly quickly. Interestingly, only after having finished the dram, does there seem to be more peat in the glass when originally drinking it!

An interesting opening gambit, but not one that we would have associated with Highland Park based on their more traditional offerings. It seems to lack their richer, rounder character. If anything, when compared to their older expressions, it demonstrates how the peat profile dissipates with age. We wouldn’t want to refer to something with scars either, in reality. As a UK resident, there is an extra cost associated with trying to get a bottle of this, which puts it at a similar cost, if not a little more expensive (when you consider the occasional supermarket deals) to its 12 year old sibling, and when you’ve got that extra sherry-led burst of fruits and depth, then the 12 year old expression is by far the better choice and indicator of the bounties yet to come in the Highland Park family (and we’ll be sharing more of an insight into that family very soon…. click here). Leaving the Highland Park fangirling aside however, as for this whisky as a standalone purchase, it is a very easy-going, simple sipper.  For your money, it still sits comfortably alongside other 10 year old single malt expressions available within the market and if you are after maybe a lighter whisky which won’t break the bank then this delicate little dram is a nice little something in its own right. A little bite. A little smoke. A little heather. A lot of sweetness. A breakfast whisky? A quick palate cleanser during a peat party? Or maybe just a nice little gateway dram.