Bernheim Original is a whiskey experiment that has gone well. Yes, that’s a bold initial statement, but it is a succinct summary of Heaven Hill’s original wheat whiskey. Why is it different, you ask? Well, whilst wheat does ordinarily form part of a mash bill for making bourbon whiskey, the laws in the US dictate that a bourbon is made of 51+% corn as its base mash bill before distillation. For it to be a wheat whiskey, the mash bill needs to be 51+% wheat in the original mash bill. (Just like corn whiskey needs 51+% corn and rye whiskey needs 51+% rye). What makes it original, is that the use of wheat as the main ingredient had not been used in American for decades, and, as their marketing states, this makes it the first new style of whiskey to be launched in the US since Prohibition. What else do we know about this whiskey? It’s bottle states that it is “Kentucky Straight Wheat Whiskey”, meaning that it has had the necessary minimum 2 years maturation in charred oak barrels. The bottle also notes that it is a small batch release, therefore made in (relatively) small blends of 100 barrels or less. Finally, the whiskey is aged for 7 years, and is bottled at 45% ABV. 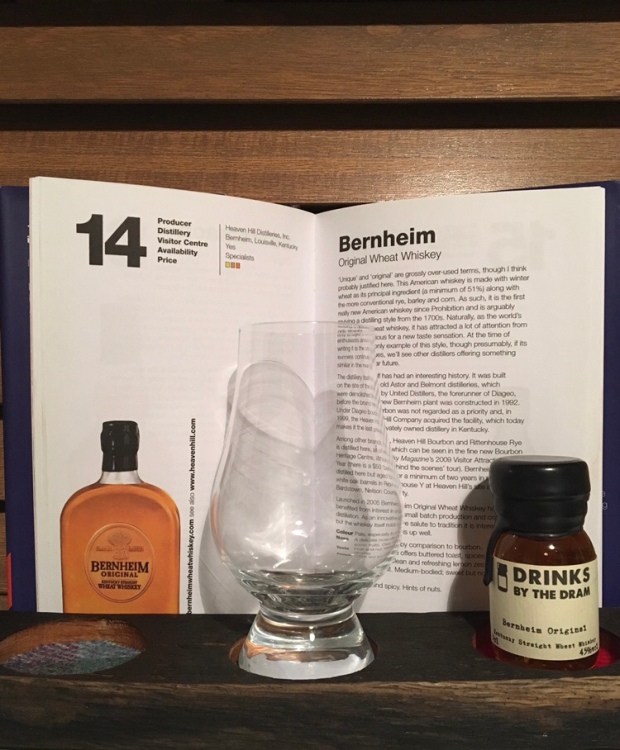 Hmmm. You’ve really got to dig for the flavours here. This is a very delicate smelling whiskey. I’ve properly stuck my nose into the glass to sniff them out. It is a whiskey though. There are soft, delicate fruits there somewhere. A little bit of vanilla. A bit of a chlorine-like alcoholic vapour in there too unfortunately – maybe sniffing too hard to get something out of it. A little zest and oaky spice to it too.

The flavours do come to life once you have tasted it though. Their volume gets turned up and there’s a buttery feel to the whiskey too. Its a little spicy, a little sweet, and still very balanced and quite delicate overall.

The alcohol only provides a delicate tingle to the whiskey and the buttery, spicy and sweet flavours all trail off in that order. The lasting flavour is like having a mouthful of sweet popcorn. Like popcorn it quickly disappears too and I instantly want some more.

As my first experience of a wheat whiskey, I’m left feeling like it is a ‘bourbon light’. Which makes sense right? I mean if bourbon is the Budweiser, then wheat whiskey is Bud Light. Maybe that’s a bad analogy because not a lot of people particularly like Budweiser, but you get the picture. After the sweet popcorn reference, I also noted that it tastes quite similar to a melted toffee penny (presumably without the scalding sensation) as it has a buttery and vanilla, sugary sweet flavour. Delicate versions of those flavours though. Given it’s fairly unique nature, it makes sense that it features in Ian Buxton’s 101 Whiskies To Try Before You Die, and it is interesting to note that when the book was published, it was still the only wheat whiskey on the market, having been launched in 2005. Today, there are now a handful of distilleries putting out wheat whiskies, including Dry Fly, Reservoir and 1512 distilleries but with that “original” name in the title, we know who started this off, and hopefully it will continue to take off and be experimented with. For now, this is a very delicate American whiskey and it could even be used as a gateway whiskey for someone trying to get into bourbons, that is, if they don’t just want to enjoy a gentle, sweet sipper.

Sample disclosure: The notes above were made following enjoyment of the whiskey via a Drinks By The Dram sample, purchased in pursuit of tasting Ian Buxton’s 101 Whiskies To Try Before You Die – luckily a revised edition of the book has been released, so even if I cross off all the whiskies within my copy, there will still be other whiskies now in the latest list, meaning that there’s more to explore and I don’t have to meet the Reaper just yet.