When the St. George’s Distillery was created, the Nelstrop family of Roudham, Norfolk, set out to document the story of their development and the first English whisky made in ca. 100 years by releasing their spirit in “Chapters”. Chapter 1 took the form of the colourless, unpeated new-make spirit, bottled after just 1 month or so. Chapter 2 followed a similar pattern, but was a colourless bottling of their peated, new-make spirit. Chapter 3 was an 18-month old bottling of the unpeated spirit. Chapter 4 was an 18-month old bottling of the peated spirit – starting to take on the colour of the barrels. Chapter 5 was the first proper “whisky” and was a limited release of a 3 year old – limited to those cash-ready types to grab a piece of history. Here we find ourselves then reviewing Chapter 6, which is the first generally available single malt genuine whisky from the distillery: a 3 year old bottling of their unpeated spirit, having been matured for those 3 and a bit years in “ASB” or American Standard Barrels and bottled a strength of 46% ABV. 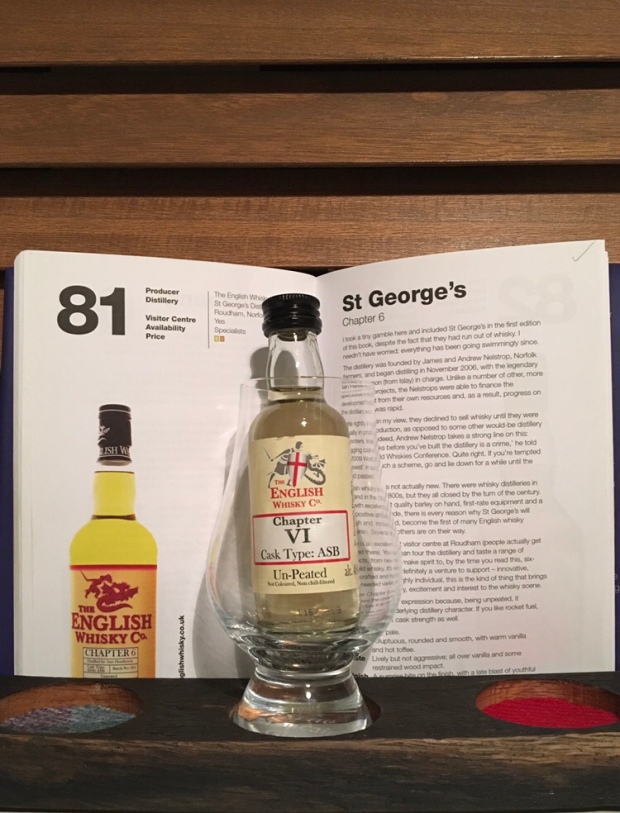 The first sensation is an instant, punchy blast of alcoholic vapours. Getting past that, this whisky is light, fresh and very, very malty. Those malty smells combine with a little sweetness to give a kind of sweet digestive biscuit flavour. The sweetness reminds me of that creamy syrupy smell as you add vanilla extract to a cake mix. Except for the cake mix here is a very potent alcohol.

Not surprisingly, it is an instant blast of alcohol that hits you first here, but the whisky actually has a fairly soft body and the initial punch smooths out to creamy taste and texture. That vanilla sweetness rounds the flavours out, with not much else talk about as the thin body escorts the flavours away.

A firey youth and warmth heats up your throat and chest but it all quickly dissipates with a trace of oaky spice. The predominant flavour again though is vanilla, and the young whisky’s texture leaves a slightly oily coating – almost like a yoghurt. That warms, rather than sooths. It is almost like a 0% fat version of a whisky cream liqueur!

The American Standard Barrels (is that code for ex-bourbon oak barrels) have been doing their job here. The overall experience is an exercise in bourbon-influence with that characteristic vanilla flavour complementing a strong malty backbone. The vanilla is so strong in fact, that it almost tastes like they have added vanilla extract to the whisky! There’s not much complexity to this at all, but at 3 years old, there never really was going to be, was there? Particularly, with a solely ASB maturation. Certainly when compared to a sherry maturation, which does tend to add numerous layers and influences to flavour profiling. But that’s not what this is about. Personally, I’m not going to be rushing to buy a full bottle of the Chapter 6 as something to have to hand, nor would I recommend it to people to buy as something to keep for a special occasion, BUT it is an interesting stepping stone and I would recommend people to try a sample as something that’s an indicator and a work in progress. This whisky is all about being a landmark and signposting what has been and what is yet to come, and in that respect, the future looks bright. This ‘Chapter’ release has certainly garnered much praise for what the distillery is set to be producing, with scores of 95 and 96 out of 100 from Jim Murray’s Whisky Bible on the initial bottlings, and inclusion as one of the 101 Whiskies To Try Before You Die (another one ticked off!). It is also worth mentioning that the distillery looks to keep the recipes and age profiles of their ‘Chapters’ so that they can reproduce them moving forward. In that respect, the whole ‘chapter’ naming element is very clever, provided that no-one gets fooled into thinking that the number is in fact the age of the whisky!

Sample disclosure: these notes were made from drinking a miniature bought from the distillery’s new visitor centre – see notes on the visit here. You’ll also see that this is now branded The English Whisky Co, rather than St George’s Distillery, which is also explained in the linked article above.

One thought on “Tasting Notes: The English Whisky Co – Chapter 6”