In late 2017, Highland Park released the first of a proposed two-part mini-series with a whisky called simply “The Dark”. The whisky was bottled with an age statement of 17 years old, but this statement was eclipsed (so to speak) by the Viking stylings to emphasise the importance of the Autumn and Winter seasons. Matching the heavy mystical and mythical marketing of late from the Orkney-based distillery, The Dark “shares the story of the noble Viking warriors who are our ancestors, of our contrasting island seasons and of the intense balance of our whisky” – that’s quite a build up! The Dark is limited to 28,000 bottles and is encased in a black embossed bottle within a black and silver presentation box, which would not look out of place in a heavy metal maniac’s dwelling. Following that 17 years of maturation, having been housed in European Oak ex-sherry casks, the Dark clocks in at a whopping 52.9% ABV. 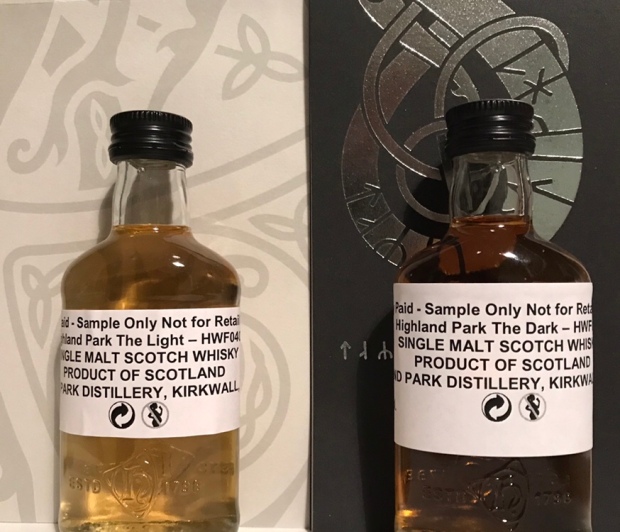 Highland Park – The Light & The Dark

Ooh there are dark sugars at work here. Once the initial alcohol blast has subsided, that is. Muscavado sugar, to be precise. Well, that’s what my nose is picking up anyway. It definitely reminds me of baked desserts. Like freshly baked cakes or those little lotus biscuits that come with a coffee. Beyond that sugary blast, there are a lot of oranges at play here. The more that I sniff, the more that they appear by the bagful.

Well, it delivers a thick smack of orange marmalade at first, followed by a dark chocolate tang and bitterness coupled with a chocolate fudge flavour – and it has the smooth texture to match. A few little, warming spices in there too amongst the dark fruits.

Smoky marmalade needs to become a thing and now! That’s the kind of flavour I’m getting at the tail end of this dram. Unfortunately those flavours fade out pretty quickly after the liquid has left the mouth though and the embers leave a tingly finish afterwards.

With the more Highland Park that I drink, the more I wonder whether their signature taste is that of oranges. Sure, they are renowned for their balance of flavours and that little bit of island smoke, but this whisky is another fine example of that big orange marmalade hit. The Dark is an apt name for the flavour profile of this whisky too, because the dark sugar flavours really stand out. Despite this being marketed as a wintry whisky that has had a sherry cask maturation, it didn’t really make for the traditional explosion of a “sherry bomb” whisky. Instead, the dark contents have made for a really good balance of sugary sweetness and juicy fruitiness. It definitely takes the dark sherry influence with a few of the seasonal winter spices (cinnamon and cloves) but without the full whack of your Christmas cake flavour fayre. That’s not intended to be negative point either because with some of these so-called “sherry bombs”, sometimes I think that you should just go and drink a sherry if you love it so much. What we have here, to try and express it another (more musical) way, is that this plays a whisky tune that is influenced by the sherry movie, rather than having featured in the original sherry motion picture soundtrack. (With that kind of analogy, you can see that this whisky is really working its magic too… Dark magic!)

Sample disclosure: This sample was received as part of a marketing release directly from Highland Park and I’ve looked to keep these notes honest and fair based on the whisky and not as a promotional piece. Given the notes above though, you will see that I would be an advocate for the whisky itself based on its own merits!

One thought on “Tasting Notes: Highland Park – The Dark”