Traditionally known for their blend of triple distilled pot still, malt and grain whiskies, Tullamore D.E.W. have developed a core range of whiskies that showcase their blends and barrel influences. There are however, exceptions to this key formula, and the Tullamore D.E.W. 18 years old release is a single malt offering, i.e. comprised of solely (triple) distilled malted barley whiskies only. Limited to fewer than 2,500 bottles, this 18 year old has been finished in a combination of Bourbon, Port, Madeira and Oloroso Sherry casks. That’s only 20 barrels’ worth produced annually. Released as a special edition in 2016, this whisky is bottled at the very specific 41.3% ABV. 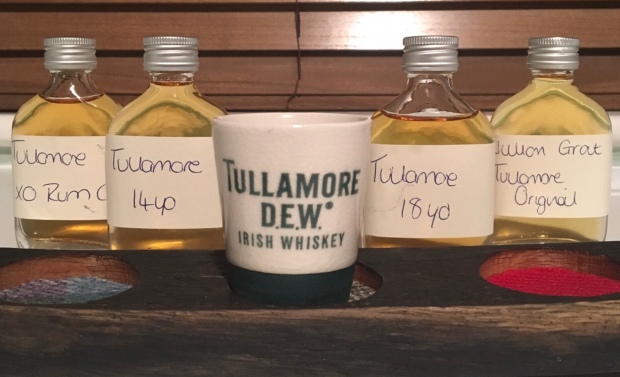 Now there’s a good whack of oak to begin with. Give it a minute and the dark wine influences make for a strong dark/demerara sugar smell. In fact it reminds me of cakes being baked. Someone’s put a lot icing on this fruit cake too.  After a little while that thick fruit and sugary nose merges to the scent of cola cubes! Really, it does.

That cola style of dense sugary sweetness is now countered by quite a lot of spice. There’s some good, toasty oak in there behind it too. The fruitiness remains though. Think wintry desserts – like apple and raisin puddings. Makes for bit of sherry meets cherry and berry cake.

Ah, There’s something amiss here. The flavour profiles are swiftly burned off with a strong, pine-y finish. It has a kind of table polish meets cleaning chemicals aftertaste. Once the alcohol has worn off though, there seems to be a bit of a shortcake biscuit final profile of flavours – sweet, malty and cereal-like.

Maybe its just the fact that this is a single malt from Tullamore D.E.W. rather than the pot still blend, but this has quite a bit of bite. Its age and multiple maturations means that the strong port, madeira and oloroso barrel influences really make themselves known, particularly the wood itself from those barrels, as opposed to the previous contents, bringing some spice to the fruity flavours. I may have just been on an off night, or it could have been a funny bottling (maybe something got in there) but the alcoholic burn itself and chemically taste made for an unpleasant interruption in an otherwise pleasant experience. The lasting memory for me however will be that lingering shortcake biscuit flavour – you know the ones: the star-shaped biscuits with raisins in and covered in lots of sugar. The flavours did linger and develop and overall it had lots of interesting elements, but there was nothing collectively outstanding about it.

Sample disclosure: This sample was provided as part of a tweet tasting, courtesy of Mr Steve Rush at @TheWhiskyWire and @TweetTastings – I’m sure he has some sort of minimum criteria, but if we can make it, then so can you! If you want to find some of those tweets from the night, then just go onto Twitter and look through the #TullamoreDEW and give him a follow and/or go over to http://www.thewhiskywire.com for more details.