Like most whisky enthusiasts, my inbox gets hammered by the numerous mailing lists and newsletters that I’ve signed up to on my quest for my new favourite dram, but one thing that I keep asking myself about some of these ‘hot new releases’ is: what is the deal with “travel retail” bottlings? I mean, really?

Over the years, I’ve been lucky enough to spend some time in a few airports and the ‘duty-free’ stores are always a personal highlight for whiling away a lot of the waiting time. What I seem to find though is that whilst you are always greeted with some familiar faces, there are then some unusual yet somehow recognisable ones – like a friend of a friend that you keep running into from time to time. Usually dwarfed at the side of the wall full of Johnnie Walkers.

Dealing with the familiar faces first – yes, they are always there, but not always in a familiar guise – they may be in slightly different packaging or different sizes, and are usually that welcome bit cheaper.

[As a side note, I’ve never quite understood why the UK deals with 70cl bottles, but finding a favourite dram at a similar price but larger bottle is something of a win – on the return leg of my last holiday abroad, I managed to pick up a litre bottle of Balvenie Doublewood 12 for £24 – like I said, win!] 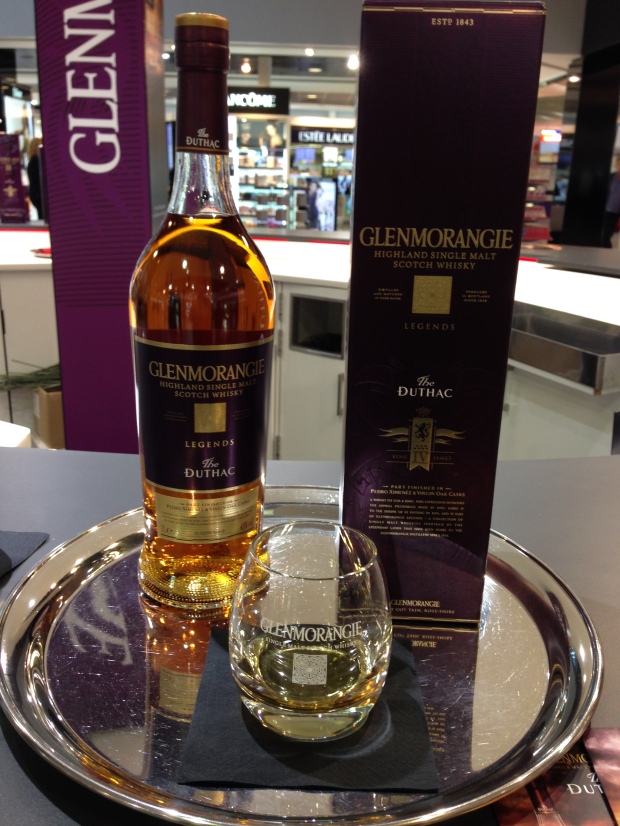 Those unfamiliar faces though… I’ve never quite understood what it’s all about. Highland Park Svein. Laphroaig PX Cask. Glenmorangie Duthac. Old Pulteney Noss Head. Smokehead Extra Rare. Why limit these to the ‘travel retail’ bracket? Do they actually earn that exclusivity? Do they taste nice? Do they warrant the extra 20% difference in price to their standard stuff? The 200% difference? The 2000% difference? Some of these things have wild prices, and often what they lack in age statement – not that I have a problem with that kind of thing – they make up for in cask types and maturation processes. So are they simply experiments in whisky development? If so, are they failed experiments? If not, and there was a particular dram flying off the duty-free shelves, would it make its way into the regular in-land stores?

What the retailers have is a captive and (usually) more affluent audience. Whether it is someone looking for something different or simply buying a bottle that they are just not aware of, you will usually see the word “exclusive” branded across the packaging of your old favourites, alongside its associated larger price tag. This all combines into a considerably successful ploy to ultimately part the travelling party from their cash – whether in their own currency or otherwise.

What particularly frustrates me is that you have to be on that tax haven soil to actually acquire one of these. Whilst they are usually generous with their samples in the airport, there is no greater sense of corporate pressure to get you to shell out the big bucks. With free booze starting to course through your veins too, you’re more likely to do so too. With mixed results too. The Highland Park Svein, for instance, would have been a mistaken purchase. Not that it is a bad dram, but it was just not as good as the Highland Park 12yo, which is readily available at a fraction of the price. Don’t get me wrong, I’ve enjoyed some of those drams before now too – ‘The Duthac’ by Glenmorangie particularly so – but at £100 a bottle for something not much better than their 10yo, it is just too much of a stretch. Which is a shame, because if it was readily available at a more affordable price, then it would definitely become a regular WU tipple.

Like it or loathe it, the travel retail market is not going anywhere though, and, with a multi-billion dollar catchment, who can blame the distilleries? It was recently reported that travel retail whiskies are expected to gross $80billion worldwide by 2020 and with the footfall in airports worldwide hitting a billion a year, there’s only one way the whiskies and prices are gonna go… skyward!

One thought on “Travel Retail – What Is It All About?”