A couple of weeks ago I was lucky enough to have had the chance to visit The Lakes Distillery situated up in, you guessed it, the Lake District. Tucked away in the scenic hills in the north west of the Lakes near Cockermouth (yes, much amusement had), this is a relatively new distillery and it made for an eye-opening insight into “whisky business” rather than the usual “whisky production” stuff that most tours usually consist of (“…and the by-product that we call ‘draff’ goes to feed the local cattle” etc. etc.) The tour itself was run really well by a guy called Rowan, who turned out to be from my neck of the woods, which helped with the post-tour chatter, and he certainly knew the process inside out.

What was immediately striking about the tour was the main building itself. For something that was opened in December 2014, I thought that this was a smart building, very much in keeping with the area, i.e. an old-looking, new building. The Lake District is known for its strong conservation laws – noting the solid work that legendary children’s author Beatrix Potter has had on the national park – and this building was no exception. Whilst very clean and modern on the inside, the buildings themselves had had to go through very stringent building procedures to ensure that they remained in that distinctive Lakes style. As the tour commenced, we were informed that the site was in fact originally an 1850s farmhouse and a series of out-buildings, and the company had bought the properties in a rather dilapidated state due to them having been abandoned and untouched since the 1970s. (Countering my initial impression,  and proving that they are in fact new-looking, old buildings!) The tour detailed the length and scale of the process to get the site into the glistening yet characterful state that it is in today. One fact that particularly blew me away was that each and every stone had had to be numbered, dismantled and then reconstructed in the same order! That’s no mean feat at all, and the results are rather fantastic – as you would hope after a £7M investment. The entry gates themselves were a sight to behold, with the silhouettes of all the key ingredients to making whisky having been forged into the elegant frame, with the Lakes Distillery’s distinctive wave-style logo on top of the structure. What’s more, the gates had been “crafted by our local blacksmith” – a sentence that you’re probably only really going to hear in Cumbria these days!

Now, despite having started off in their gift shop and having seen bottles of whisky for sale, the penny only dropped for me once the tour had started and I’d heard “December 2014” again that this place was actually less than 2 years old. Not only did that explain why the place was looking so well appointed, but it struck me that these guys haven’t actually made any “whisky” yet. Rowan then went on to explain to the group that the distillate needs to have been in a barrel for 3 years before it can officially be called “whisky”.

So what were they selling in the gift shop?

The answer is that they are selling “The One”, which the Lakes Distillery boasts to be the “first Great British blended whisky”, i.e. featuring whiskies from Scotland, England, Wales and Northern Ireland. (Proving that their marketing again relied on simplicity and honesty.) Whilst they wouldn’t reveal which distilleries the constituent parts come from (though the Welsh and English contingents are probably easier to deduce) it seems a fairly novel idea, and I was pretty surprised that this is the first time it has been done. That said, something didn’t feel right. The English component of The One could still not be their own (probably hailing from the Norfolk direction), and I guess that they would look to replace the English proportion with their own product in due course. What I was wrestling with here was the concept of them selling a whisky from the Lake District, without having produced any actual ‘whisky’ yet themselves. As I’ve mentioned, this is where my interest turned from finding about the whisky itself and, instead, turned towards just how much investment was needed to get this distillery up and running and how far ahead the directors must be planning to actually make this a valid business venture. The tour did help to answer some of these questions though…

Tucked away in the Lake District

Firstly, there was quite the marketing onus on joining the “Founders Club”. For a mere £695 on the day (let me think about it for a minute…) each new member is entitled to a single 70cl bottle of the distillery’s annual output for the first ten years, plus two 5cl miniatures for tasting – the emphasis therefore being “collect the whole set”, with each bottle being packaged in a progressive year-on-year addition, up to their real goal: a 10 year single malt. What I will say though, is that their founder, Mr Paul Currie, has started this venture after being part of the The Arran distillery’s development, so there is certainly good precedent here!

Secondly, there were two, more readily-made Lakes Distillery products on offer within the gift shop: The Lakes Gin and The Lakes Vodka. Our guide informed us that the distillery buys in a base grain distillate and then carries out their own further distillation to make their vodka or, when adding the ‘botanicals’, their own gin. Even from the layout of the still-room it was obvious that the key product being made here was whisky, but tucked into the corner was a still dedicated to the clearer libations. To be perfectly honest, I was a bit disappointed that they were buying in the base product, but this was appeased when I was informed that the all of the botanicals were sourced locally, including the all-important, gin-essential juniper. To be fair, the final gin itself is one of the finest that I’ve ever tasted. Full of rich, complementary flavours and really palatable even before adding the quintessential tonic. 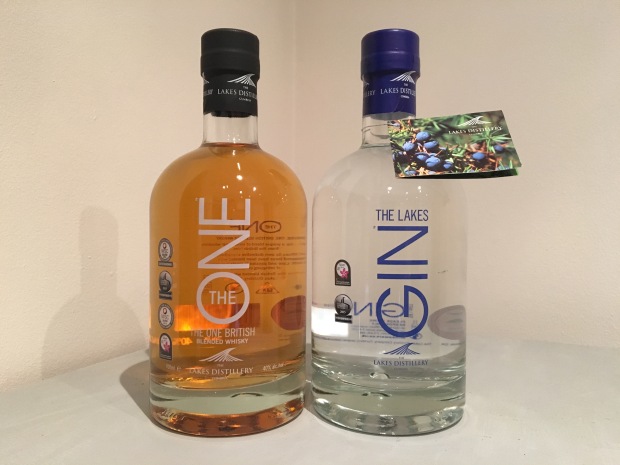 The One & The Lakes Gin

As we walked through the current barrel warehouse, we were purposely guided past the first casks of the Lakes’ new whisky-to-be, which included a barrel branded by Princess Anne(?), and a barrel bearing a familiar 007 and pistol logo, which will invariably become a marketing scheme in the future. At the end of the warehouse was an engraved list of all of the founding members to date, which made for another opportunity to promote our congregation to sign-up to the club.

At the end of tour, we were taken into the tasting room (not surprisingly held within the gift shop annex) and each of the distillery’s entry level spirits were available (albeit not the currently moonshine-like single malt spirit itself). For me, their standard gin was actually the highlight of the drinks available, and we also got to sample their “Explorer” expression of the gin, which was significantly stronger tasting, and packing a few more ABV to boot. The One itself was a pretty good blended whisky and I personally found it more reminiscent of a whisky liqueur with an overriding sweetness and “whisky flavour”. I’ll have to try more to really discover it (happy to do it) but on first taste it seemed like a box-checking exercise of wood, malt, and gentle smoke. The gift shop was also offering a variant of The One, which had an additional 12 month maturation in oloroso sherry casks, encased in a rather patriotic union flag – unfortunately we were beyond the sampling stage when I discovered this additional offering.

Overall, I left the distillery in a conflicted state of both contentment and ambivalence. I was excited for the new product and impressed by the care, dedication and craft going into making a new whisky, but I was also left a little bruised by the constant marketing and cash generation schemes going on. To me, behind the nicely appointed warehouses, their stainless steel vats and fixation on your wallet/investment made the distillery seem like a cash-focussed factory. For me, the alchemy and love of whisky-making seemed to be overlooked in favour of the profit-and-loss table, but then again, without any actual whisky made yet, could it be any other way at this point? There is a business to be run here after all! A great little tour though in a stunning location and definitely one to keep an eye on! 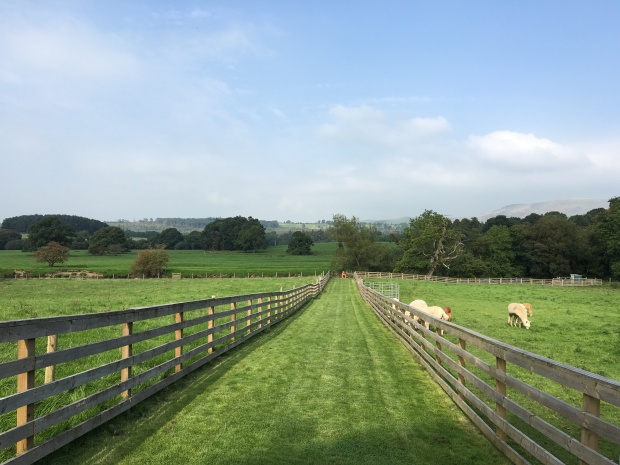 View from The Lakes Distillery (including Alpacas!)

One thought on “Distillery Visit: The Lakes Distillery”