You will sometimes hear whisky being referred to as ‘liquid gold’. This is mainly due to the value associated with it, but it also obviously refers to the various shades of golden beauty that the liquid can have. In spite of this however, when whisky is being made, the ‘new spirit’ that is created from the distillation process is actually colourless. In fact, you cannot call it ‘whisky’ unless it has been in a barrel for 3 years, and it is this aging process and the interaction with the wooden barrels that gives whisky its distinctive colour.

Clearly, the longer that the liquid is in the barrel, the more time it has in contact with the wood and the more of the wood’s qualities therefore infuse into the whisky. Put simply, the older the whisky, the darker it gets. WU were lucky enough to go to a warehouse tasting at Lagavulin where local legend and distillery hero Iain Macarthur (a.k.a. “Pinky”) entertained us and took us through a selection of drams taken fresh from the barrel, from which we could really see the effects of aging on their wonderful whisky.

First up was the ‘new make’ spirit that was fresh from the still that day. At a fairly astronomical 68% ABV we expected this to blow our heads off, but surprisingly it didn’t – though it still packed a punch! Perfectly colourless, you could essentially just taste the barley and the distillery’s distinctive peat once you got past the alcoholic burn. Not something that you should have every day at 10.30 am!

The second dram was a 9 year old from the barrel, and the barley taste was still there but it almost felt like it had more of an alcohol burn, despite ‘only’ being 58% ABV. Not surprisingly, the whisky had taken on the colour and tastes of the barrel, but was still relatively light gold in colour compared to the staple Lagavulin 16.

The third sample was straight from the barrel after 11 years, and the liquid was a touch darker again in colour. This dram had developed quite a sweet taste from the wood and a noticeably smoother finish to its predecessors but still packed quite the punch.

Next up was a 15 year old – one year away from the distillery’s core output – and it had really taken on caramel notes from the wood, matching the sweetness with a softer finish, but still delivering lots of smoke and peat. This dram was now at that rich, deep gold colour that Lagavulin is known for.

Last but not least, we skipped a few years and had a dram of a 31 year old Lagavulin. Now this was a real treat for us, and whilst the value of the dram isn’t known as it is fairly unique and only available from the distillery, the estimate was that each dram would be worth £100-£150. Interestingly, the colour of the liquid itself hadn’t actually deepened that much compared to the 15 year old and whilst it still had an obvious woody taste and sweetness, it was mysteriously returning back to that original barley taste that we had first encountered in the new distillate. 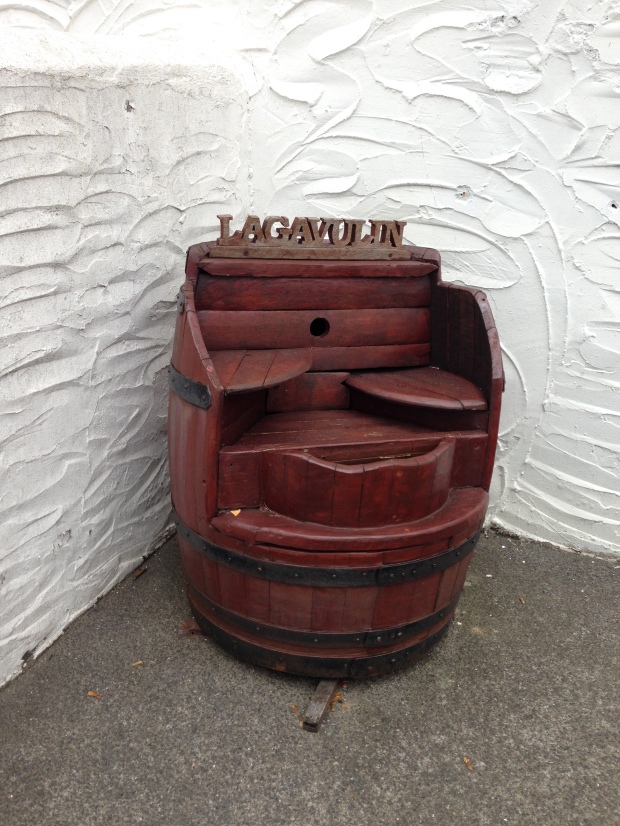 Oddly, the interaction between the spirit and its wooden surroundings can actually vary from barrel to barrel. So much so that two barrels containing the same base liquid, which have been made from the same wood and have been aged over the same period of time, can produce two entirely different coloured end results. To combat this, some distilleries choose to add a caramel to get a uniform colour, so that customers ‘see’ the same product time after time and whilst this may be disappointing for some purists (and is even denied by some distilleries), it is essentially drawn from necessity to keep the buyers happy. What this goes to show is that whilst whisky-making it is not an exact science, there is still some truth behind saying that it is colour by numbers.

One thought on “Colour By Numbers – A Lagavulin Case Study”