Having originally bought the first edition of this book as a gift for someone a few years back and then having continually referred back to it thereafter, I was lucky enough to have had the latest edition bought for me in return this Christmas. From the start then, you can tell that I’m a fan.

The book itself is an interesting guide to whisky and has a similar message to that of whisky unplugged, ie it’s not all about the most expensive whiskies in the world, but rather, it’s about the variety and tasting them for yourself and making your own opinions. 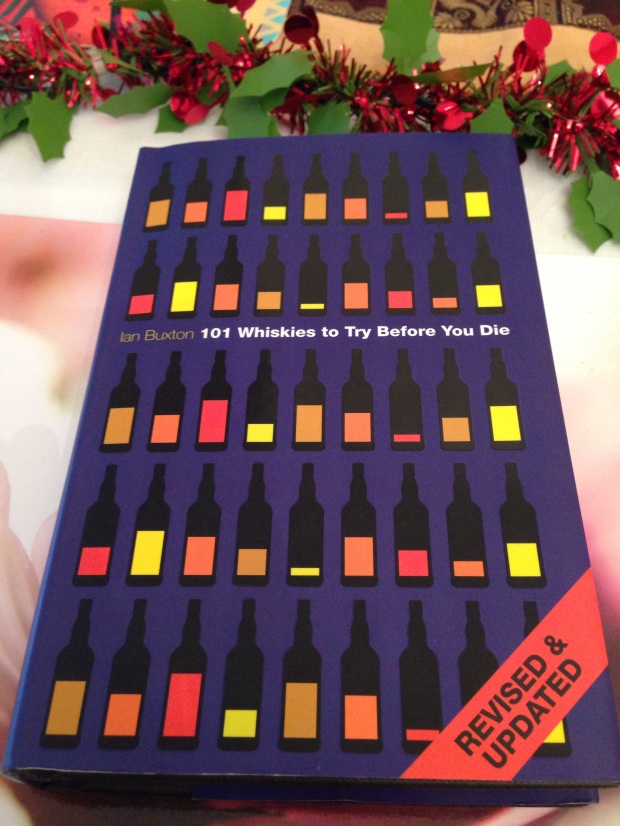 101 Whiskies To Try Before You Die

The premise of the book is that it is a list of 101 whiskies from around the world that are reasonably affordable and would form the good basis of any self-respecting whisky drinker’s knowledge and back-catalogue. The 101 aren’t ranked in any way, rather, they are listed alphabetically. Similarly, the book does not offer a scoring system or rating but simply talks about the taste and gives a little blurb about its history and the distillery. It does offer Mr Buxton’s own tasting notes though and leaves a welcome blank section inviting the reader to fill in their own notes.

One way in which the book does grade the whiskies however is by their average purchase price, and there is a handy little colour grading that identifies the cost of what is being reviewed, with bottles over £150 being the highest band and accordingly highlighted in red.

The foreword of the book appropriately sets the tone for the compendium, with the author’s own mission statement and references to his experience within the industry and certain key players and names. Ian Buxton has a comedic and tongue-in-cheek style of writing that offers a few chuckles but also clearly demonstrates his passion and knowledge on the subject of whisky, its creation and its market.

Having compared the book’s current two editions, there were roughly 20 whiskies from the first edition that were dropped and replaced for the second, which shows that a) this is a well considered list to begin with, and b) that the whisky world is evolving, which can only be good news for us whiskyphiles.

Overall, it’s a great little read, and a handy reference book and, as a hardback, has accompanied me and survived on several tastings to date. Furthermore it appears to have spawned at least two other similar books from the author (101 World Whiskies… and 101 Legendary Whiskies…), which I’ll be sure to stock my shelves with in due course.

One thought on “Book Review: 101 Whiskies To Try Before You Die (Revised Edition) by Ian Buxton”