Following the 2017 rebrand of The English Whisky Co. it seems that the ‘Chapter’ naming and numbering convention of the distillery releases has fallen by the wayside for a stronger emphasis on their newly found identity as “The English”. Since the initial release of their two staples releases under this brand (“Original” and “Smokey”), the distillery has built up their “English” roster with different cask maturations [ed: as opposed to the more experimental “The Norfolk” brand of whiskies that the distillery is also producing] and this particular bottling represents their first solely wine cask matured entrant into that roster. What is more surprising is that, without it being advertised as such, this whisky also represents the distillery’s oldest aged bottling to date. This small batch release was originally distilled and barrelled in Portuguese Cabernet Sauvignon casks in June 2007 and was bottled for release in August 2018, taking it just past the 11 year mark, and has been presented at a strength of 46% ABV. 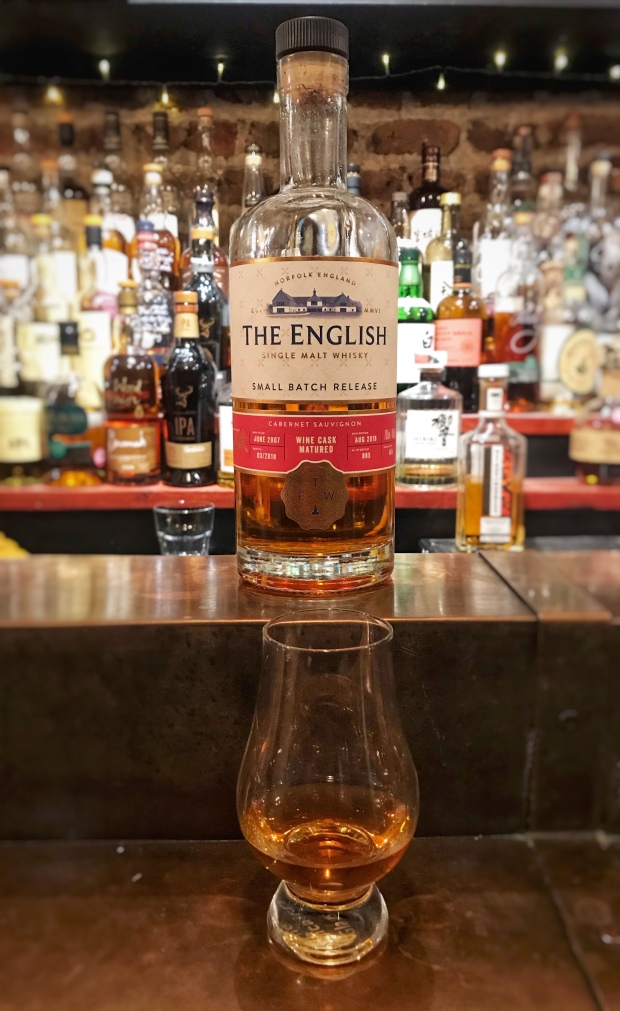 Well, there’s an instant blast of lovely, rich, red fruits and it seems that the ‘cab sav’ is doing its work here. Despite this being an unpeated expression, this seems to have a slightly smoky or toasty flavour to it too. The fruits combine with a little bit of oaky spice to make for a very festive profile of flavours on the nose.

The fruity flavours really start to reveal themselves here amongst the malty coating on the tongue – really rich red fruits too. The taste of strawberries, cherries and plums are the first to come to mind. The oak really comes to play at the end of the taste sensation, bringing an intense oak flavour and a little cardamom sense of spice.

There is a slightly bitter aftertaste on the palate here that I was not expecting as this whisky slips down (just like after you have accidentally bitten on a cardamom pod). Mixing that little spice and acidity together along with the lingering flavour of those red fruits, leaves a really delicious Christmassy taste, and, dare I say it (being a Cabernet Sauvignon housed spirit), a slightly drying one at that.

Sometimes there is a danger of knowing too much when going to try a whisky, and it seems that, from the moment that I read that this was housed in former Cabernet Sauvignon casks that my tastebuds were set to taste just that. Despite that pre-determination, this did make for a very enjoyable whisky, that really did present a more intense set of fruity flavours than I was initially expecting. Or at least, it did when it came to red fruits. It is also interesting that these are the flavours that their oldest whisky have produced from this particular cask maturation, and, given that this was barrelled within a year of the distillery’s first production must therefore have been an initial experiment or opportunity seized by the team in Norfolk. Well, it has certainly paid off, as it does represent a marked difference to the regular bottling of The English, and is another example of wine cask matured whiskies that are breaking the norm and are producing great results down the maturation road (such as Glen Moray‘s Chardonnay Cask, or Starward‘s Wine Cask Edition). It would be very interesting to try this one against its limited release, single cask sibling which the distillery has also released at its natural cask strength (56.8% ABV), but for now, I’ll take solace in the tasty rewards of trying this more general release, from the ever-impressive range available from Milroy’s of Soho.