Over the past couple of decades the world market has seen a strong rise to prominence for Japanese whiskies. Japan is currently the third largest national producers of whisky (behind Scotland and the US respectively) and there are countless volumes written about how it compares to the traditional Scotch whiskies. If you actually look into the history of Japanese whisky then that is not at all surprising, because the first Japanese whiskies were made as a result of a young scholar (Masataka Taketsuru) having been sent to Scotland (by Shinjiro Torri) to learn the trade in 1918 – although whisky writers around the world cannot seem to decide for themselves as to which of the two they should hold as the true Japanese master.

Despite the plethora of articles out there about Scottish vs Japanese whiskies, the only way that you can truly decide for yourself is to actually taste test them, so that’s what WU has done, courtesy of SH Jones and our excellent curator for the evening, Freddie.

The theme of the evening was simple: pair up a Scottish whisky and a Japanese whisky based on their age, cask and peatiness and then see which one you thought was best. 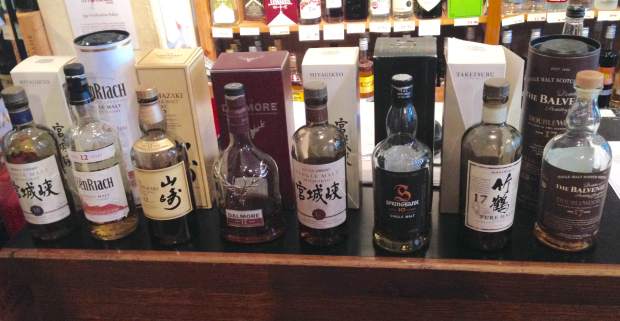 Japan vs Scotland – The Line-Up

First up was a Nikka Miyagikyo 10 vs a BenRiach 12.

Clearly starting with the lighter of the evening’s drams, this was a contest between classic maturation in oak casks. Here the BenRiach 12 demonstrated a sweet citrus flavour and mellow finish, classic of a Speyside dram of this age. Effectively, the Miyagikyo 10 seems like Japan’s closest match to a Speyside single malt, and was a good match up, with the Miyagikyo 10 offering a light, floral and sweet finish, leaving a taste of sweet peardrops. Both were lovely drams, and a great starting point with both offering a distinctively light, inoffensive and smooth character – something that I would usually refer to as  “midweeker” dram – but based on the smoother finish and its similarity to a Bruichladdich 10 meets Glenlivet 12, I scored the Miyagikyo 8.1/10 and the BenRiach 7.6/10.

The second pairing saw a Yamazaki 12 go up against a Dalmore 12.

Both of these whiskies have very strong brands with the name Yamazaki being synonymous with Suntory good times and the Dalmore’s trade mark 12-prong stag capturing big page spreads in the whisky magazines. Again, I thought that this was a good pairing with both drams at the same age and offering a fuller sherry finish throughout. The Yamazaki 12 had a strong wedding cake nose, which continued through the taste, with the dried fruit and spicy notes but a fairly quick finish. The Dalmore 12 starts with a strong vanilla nose that makes its way through to strong spicier notes with raisins and Christmas cake on the taste. Again, this had a fairly quick finish, but a fuller, sweeter flavour. On this one I think the Dalmore had a little bit more consistency and edged it – but only just. Yamazaki 12 scored 7.5/10, whilst the Dalmore 12 got 7.6/10.

The third bout was between a Nikka Miyagikyo 12 and a Springbank 10.

Before even comparing the two whiskies that had been paired here, it was interesting to compare the Miyagikyo 10 (tasted first, with a tactical bit left over) to its 12 year old bigger brother and if the only difference is the aging, then that 2 years made a big difference, but I think the other key family member here is old peat! The Miyagikyo 12 recently scored the 2015 World Whisky Award for “Best Japanese Single Malt 12 Years and Under” and it’s easy to see why. The dram had a good-bodied sherry feel, with a wedding cake and dried fruit nose, an orangy/marmalade fruity tang on the taste with the warming peat smoke supporting it the whole way, ending with a mid-length and delicious mouth-feel finish.

The Springbank 10 had a lot to compete with and, to be fair, it did well. The dram had much less of a sherry feel to it because of its maturation in a mix of sherry and bourbon casks. This meant that the sweet, vanilla notes from the oak took the edge off the sherry on the nose. These flavours then made way for a spicy and lightly peated full body on the taste and had a fairly lingering finish. Whilst it was a nice dram, I think the pairing might have been a little unfair on the Scots here, because the Miyagikyo 12 was an outright winner – and my favourite dram of the night. In the end, I scored the Miyagikyo 12 a whopping 9.0/10, and the Springbank 10 got 7.8/10. This was simply something excellent being paired with something very good.

The final tasting of the evening (with slightly more generous measures as we proceeded…) was between the Taketsuru Malt 17 Years Old vs The Balvenie 17 Year Old Doublewood.

Now this was the pairing I was most excited about (until the Miyagikyo 12 stole the show), and again saw a recent winner of a 2015 World Whisky Award winner from Japan (albeit this time taking the world title of Best Blended Malt Whisky) up against a Scottish traditional stalwart. Both containing whisky aged for at least 17 years and both weighing in at a tax-friendly 43%, this seemed to be the fairest fight of the evening on paper, and neither dram disappointed. The Taketsuru is a blend from Miyagikyo and Yoichi. As noted above, the Miyagikyo whiskies seem to be pretty great light-mid drams, whilst the Yoichi counterpart is more renowned for its highly peated flavours. The combination was fantastic. The nose had a distinctive, spicy and summer fruit feel, which really carried through into a red berry taste. It may have been the power of suggestion on the evening from the notes, but there was a distinct Ribena berry taste to it underneath all the spice and smoke. The finish itself was slightly harsh but ended on a tasty fruit note.

The Balvenie 17 is similarly a combination of maturations and sees American oak barrel sweetness fused with sherry cask fruitiness. It certainly smelt like a bigger version of the Balvenie 12 Doublewood and had a deeper, sweeter taste to it, with a caramel-like texture and creaminess. The finish was initially harsh but left a lingering and improving sweetness. I may have been a little starstruck on the night, but I edged the Taketsuru in front of the Balvenie with a score of 8.9 playing 8.2.

Overall, I did not expect that end result. I genuinely went into the evening expecting a Scottish landslide, but was willing to give it all a fair try and was pleasantly surprised by the outcome. I think that the availability of some recent award winners may have been a little unfair on the Scottish staples, but from what I’ve come to learn about Japanese whiskies, I can see why there is strong interest in their fine produce and I would happily set up a rematch to see what other results are out there, such as the heavyweight peat title of Yoichi 10 vs Laphroaig 10!

Even more interesting is that since the tasting, Islay’s Bowmore have just released a Mizanura oak expression, and I would like to think that we see some lessons learned and shared across the globe, rather than it be an either-or duel of the drams! As for now though, I’ll consider this a delicious international friendly.