Whenever a new business is set up, it’s founders will have big aspirations. When Kavalan was set up in 2005, it was no exception. Their distillery even reportedly has a sign outside stating that it (and by extension, Taiwan) is “The New Homeland Of Whisky”. A pretty bold statement. It may not have come as much of a shock to them 10 years later then that their Solist Vinho Barrique was awarded World Whiskey Of The Year in 2015, but it did to a lot of other people. Proving that you don’t have to rely on an age statement, Kavalan have been focussing strongly on flavour, and this is no more evident than in their Concertmaster release. Branded as a port cask finished whisky, this young whisky (it has to be right?) has been part of the mainstay Kavalan expressions, and is also matured in wine casks ensuring that it pours in a rich, mahogany colour at 40% ABV. 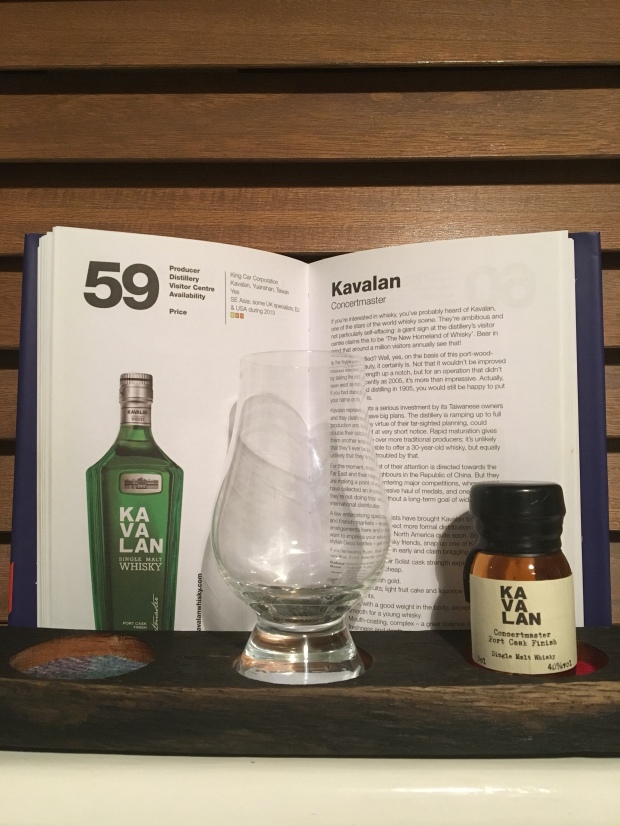 Wow. There are some strong and deep flavours in battle for your attention here. Redcurrants and other red berries are the first to poke through and there’s a strong oak body to this. It has quite a firey boozy nose too, particularly down at 40%, but it is complemented by the sweetness of toffee/caramel and dark sugars.

Once it’s in the mouth, it is surprisingly soft textured and a lot less boozy than the vapours were letting on. It’s a lighter, softer melee of flavours too with summery red fruits (strawberries and raspberries) at play, offsetting the oak flavour (which is still quite present) and a hint of spice towards the end. After reading about the whisky in 101 Whiskies… I also can’t seem to avoid that liquorice note afterwards.

…and the fire is back! The alcohol returns to the flavour profile and warms you up pretty quickly. That oak spice is there again but the lasting flavour is that of raisins. Lots of raisins in fact. The final lingering flavour is a really satisfying juicy note.

Well, the notes that I have read talk a lot about the whisky’s balance, but in my experience, this was more about a tussle between robust flavours that each then break free from the complex combination as you enjoy the drink. It’s a battle between the extreme influences too, as the sweetness of the port and wine casks are offset by a savoury, spicy backbone from the oak. Considering its youth, (maybe 5-6 years old) the complexity of the whisky belies its years, and maybe it’s that younger, fresher alcohol that’s stirring the ingredient flavours so thoroughly. Overall, a very fruity whisky which could easily venture into liqueur territory if it wasn’t for the oak body and boozy burn reminding you that it is a single malt. That Art Deco packaging is pretty cool too, albeit this was courtesy of a Drinks By The Dram sample only. Definitely a great experience and certainly one to try if you can (and before you die, of course, finding itself at #59 in one such list)!