After a brilliant day’s musical and liquid entertainment on the Saturday, I managed to wake up without a single regret on the Sunday, and the weather was also as surprisingly clear as my head. There are few sights in this world that I’ve been lucky enough to witness that are as serene, calming and stunning as Loch Fyne in the sun. With that breath-taking start, and some tactical lining of the stomach, we set off to enjoy the second day of the festival to take some more Argyll-based indulgence.

Today was not a day for hanging about as the punters lined up at the whisky tent to sample the wide range of delights offered by the Loch Fyne whisky stand. First up on the roster was Laphroaig 25, largely because I could see that there was not much left. As a self-confessed peathead, this was one of the drams that I had marked down for sampling from the offset, and I was not going to miss out, so regardless of whenever lunch time was, a healthy dram was poured. The nose was quite surprising. There was the Laphroaig smell, of course, but it seemed to have been tamed by the aging process, with a sweet and salty popcorn nose that got sweeter and slightly fruitier by the taste. The finish was very smooth and the trademark fiery smoke only made a late and lingering appearance as the sweetness faded. Clearly the additional years of maturing in the barrel had taken my favourite peaty dram in a new sweet direction, but without compromise on the smoke, albeit the ferocity of the dram was contained. What a start! (8.9/10 if we’re going down the scoring route). Before heading on though… food was needed and the wonderful smells coming from the food tent was driving my appetite wild.

The food options were incredible and having opted for a filling real Mackay stovie, my wife and I sat and witnessed a couple of food demonstrations. First up was a nice young chap from local restaurant Samphire who whipped up a storm. Next was the top chef Jamie Nicholson from Loch Fyne Oysters. Whilst oysters were not served – probably a wise choice in a festival environment – we were treated to a delicious freshly prepared cod dish. [After a quick chat with him, he invited us back to try oysters at the restaurant later that week, and bless him he remembered us and even gave us a dessert on the house! Gent!] The following demonstration was some sensational Thai food cooked up fresh from local favourite Sujitra Scott. Let’s just say that I didn’t need to eat much more that day…

After a graze and gorge session, I was back to the top dram mission, and acquired the second of my three 25 year olds of the day, and that was the Bunnahabhain 25. This dram offered a lovely sherry nose and was very sweet to taste. It was like honey, without being malefluous (yep – the pretentious dictionary came out for that one). The finish was fairly quick but the sweetness left a tang in the throat. It was incredibly drinkable and worringly so with the price tag that the bottle attracts. 8.4/10

Before heading into a comfortable festival stupor, my wife and I took the opportunity to take the discounted castle tour. Inveraray Castle is stunning. Just look at that picture. My wife suggested that it looked like something from Downton Abbey, and sure enough, as we got into the castle’s dining room, there was a still of Dame Maggie in her period drama pomp. The castle itself is magnificently turned out, as you can imagine, with the available rooms all neatly displaying the treasures that the Dukedom and Clan Campbell had acquires over the years. What was prevalent was that the Duke and Duchess had clearly had a great influence on modernising whilst maintaining the castle, with beautiful photos of their family throughout. The display of weaponry in the castle’s atrium was more than testament to that management.

Time was pressing on though and one of the bands that I really wanted to see were due to start, so we gave each room an appropriate amount of awe and appreciation and then made it out to the gravel for some more nourishment and folk, this time presented by the Shiverin’ Sheikhs and who doesn’t like rockabilly? Good times continued.

The third dram of today’s big line up was Bowmore 25. Again, the age of the dram brought a sugary sweetness, with a light almond and smoky nose. The taste matched the nose exactly but brought an increasingly spicy note and warmth to the smoky tickle. It had a fairly mid length finish that didn’t quite fill the mouth and stood as a very well rounded dram – all the key players bring their A-game for this dram. 8.3/10 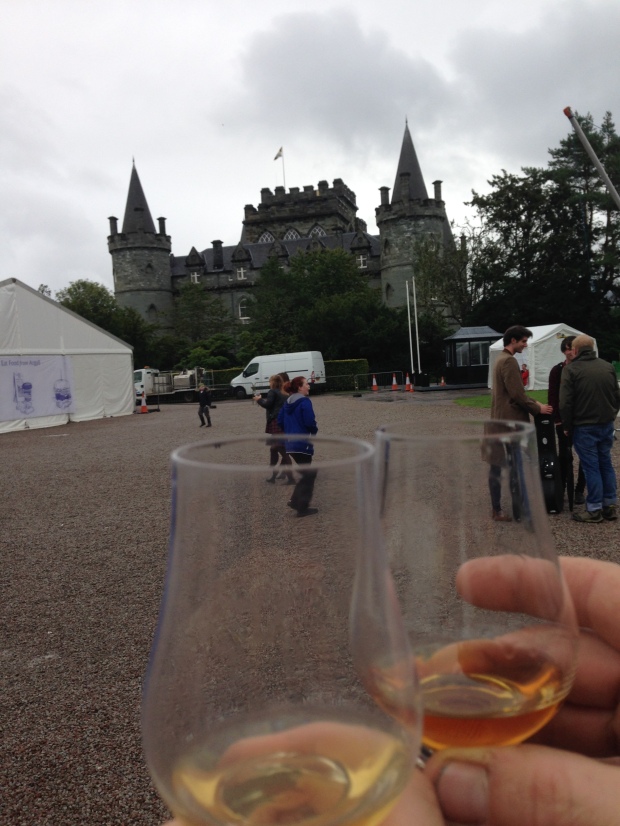 The penultimate dram of the day was the 2014 release of the Lagavulin Distillers Edition. I’m a big fan of Lagavulin and was looking forward to tasting something different from them and this beast delivered. It had that distinctive Lagavulin coastal air and peat smoke, with a hint of sweetness. It certainly had the most ashen-tasting smoke of the Islay offerings of the day and had an underlying toffee taste and finish. It may have just been the fact that I’d been on the peat on all day, but this felt like a Lagavulin light, if such a thing could exist. As the effects of the day were making me more lyrical, my notes ended by stating that “the brakes aren’t on, it’s just a Lagavulin in cruise control. Possibly more rounded than its 16 year old counterpart. 8.7/10.” Ah well. I was having fun. Clearly.

The final dram was the most local of all of the offerings, because I tried some of the mysterious “Living Cask” by Loch Fyne Whiskies’ own store. This is a batch of whisky that is made in-store and constantly evolves as the proprietors cook up their own blend using a recipe of their own choosing – one which they were not willing to divulge at any point. Given the description of the process, it was no surprise that the nose delivered all sorts of elements whilst not having anything too distinctive. The mystery continued with the taste, which was surprisingly light with a delicate peppery kick which disappeared quite quickly. It might have been because I had spoiled myself during the day and had been on some fairly big hitters, but this didn’t really do it for me. It was great to take part in part of a whisky legend (see Ian Buxton’s 101 Legendary Whiskies…) but overall it was just a pleasant dram with nothing much to write home about the taste itself. 5.5/10.

[I must add though that I did go to the store the following day and sampled their “Living Cask 1745”, which is their own peaty, Islay-centric blend and that did deliver the goods for me. A great balance of fairly delicate peat smoke and silky sweetness. 8.0/10] 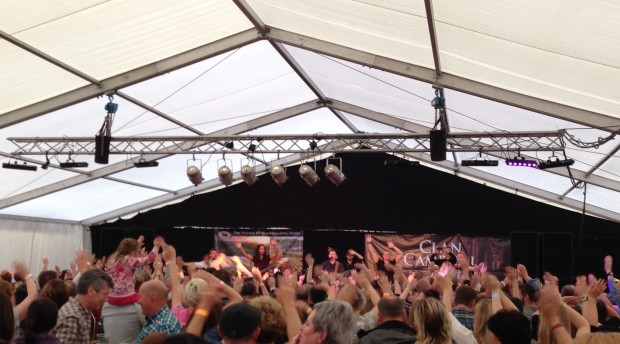 Sandwiching these drams with fine food and Fyne Ales made for another fantastic and enjoyable day, and the weather played along nicely and made for a wonderful climax as Skerryvore closed the proceedings. [I would heartily recommend their Decade album, and the Bruichladdich Skerryvore Decade cask strength single malt that was exclusively released for band, should you manage to get your hands on it!] It was a great send-off to a great, local, fun and friendly festival and I for one will certainly be returning.