When the WU guys were putting together a trip to visit Speyside, needless to say that we were spoilt for choice. With over half of Scotland’s distilleries being based in the area surrounding the meandering River Spey, and none of our 4-strong troop having been to the region before, we were living and breathing the grown-up equivalent of being kids in a sweet shop.

Between us, we had found a great looking cottage in the village of Archiestown for a long weekend in March (yes, that’s how long it’s taken to write this up) which we then used to triangulate a Speyside visitor centre hit list. With the cottage being roughly equidistant from Cardhu, Aberlour and the region’s giant, Glenfiddich, that had pretty much settled it without having to look much further, but as the title suggests, we couldn’t visit the region without also going to Glenfarclas.

Double Thumbs Up for Glenfarclas

What had particularly attracted us to the distillery – other than having enjoyed their whiskies on numerous occasions throughout the years – was the fact that it was still a family run distillery and hadn’t succumb to the big money ownership that many distilleries have (and that many have had to). What that meant to us was that we were expecting a smaller distillery with more humble staff than your standard big-budget-backed whisky-maker, and it certainly delivered.

Located just off the A95, the roadsign to the distillery was almost too easy to miss, but luckily enough the classic red font of the Glenfarclas logo stood out from the snow-covered roads and fields, directing us up a narrow farm lane to the car park. As we shimmied and skidded our way along the icy track we noticed a giant tour coach parked just outside the visitor centre (which we narrowly missed) and as we drove around an old and ornamental still, we managed to find one of a few dug-out parking spaces. 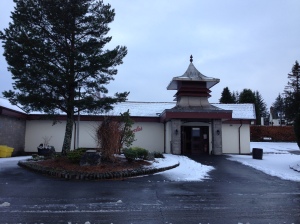 Having taken some 9 hours of travelling from our southern England starting point, we bundled out of our car and looked on in awe at the picture perfect distillery. Covered in snow and with the warmly-lit interior beckoning us inside, we entered the visitor centre to welcoming smiles and hellos from the staff – and this was with just 45 minutes left on the clock of their working day.

The visitor centre is of course, first and foremost, a gift shop and upon walking in you are instantly drawn to the remains of another still and the multitude of glass cabinets adorning the room’s walls. Each cabinet was themed with past releases and current offerings all nestled amongst the rare and ancient drams from the distillery’s past. These were also accompanied by price tags that ranged from reasonable to eye-watering. Our attention was particularly drawn to the distillery’s “Family Cask” section, filled with bottles in chronological order from the date that they were first distilled from 1952 onwards. We each sought out the bottle from our respective years of birth, and were content with just looking through the cabinet doors, rather than shelling out the £3,500 each!

Given the timeframe, we were not in time to undertake any tour, but we had plenty of time to enter the tasting room, and join up with the coach trippers (who were probably all 40-50 years our senior) now at the fun end of their tour: the tasting. The room itself was like a Victorian dining hall, with a set of long tables down the middle, with a few smaller tables dotted around and more wooden cladding than Ron Burgundy could ever have wished for. The whole room was covered with old advertising posters and newspaper clippings from yesteryear. There was a real sense of history and nostalgia here, with a clear emphasis on family. 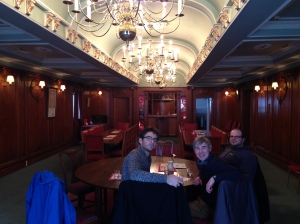 To the matter at hand, our troop found ourselves a seat and were presented with a sample of their opening gambit, the Glenfarclas 10 year old. Our new host then reeled out a well-rehearsed but still well-delivered spiel about the history of the distillery and we were all ears. As we listened, we savoured our first dram of the day, picking out the flavours that stem from the family’s longstanding use of sherry casks. The 10yo proved to be a fairly light dram, enjoyed in no time at all with its Pear drop sweetness and pretty quick finish getting our tastebuds going. 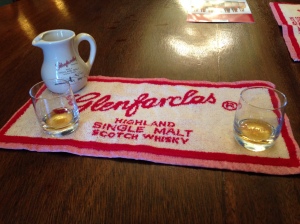 Our temporary curator then plied us with a serving of the Glenfarclas 15yo and that’s when the sherry influence really hit home. This whisky had a much fuller, fruitier nose, and the 46% alcohol gave for a fuller taste and body too. It wasn’t all sherry flavourings though as a little bit of time and water released sweet vanilla and a little citrus into the mix. An excellent whisky that seemed to knock its younger sibling out of the park. 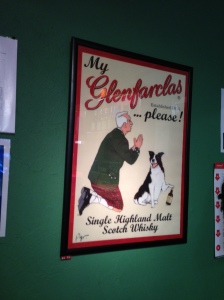 As the history lesson turned into more of a flowing Q&A session, we were presented with the third of the distillery’s post-tour offerings, the mighty Glenfarclas 105 (Unfortunately not 105 years old – can you imagine?) Whilst I had experienced and loved this whisky before, my senses still took a battering, as did the other guys’, as it’s 60% ABV natural strength delivers a real punch. It has a BIG nose leaving you fighting the alcohol but some fruitiness (raisins?) and sweetness still manage to poke their way through. Without the aid of water, the 105 pretty much attacks the palate but not the throat strangely enough. After some taming though that fruitiness really comes through with faint sherry this time.

It was at this point that the coach group were being hustled up by their weary-looking driver, and a little bit of minesweeping was afoot. As the congregation filtered out though, we keen-beans had pretty much settled on acquiring a bottle of the 15yo but our host didn’t seem to want to rush us out and after a little cajoling he went to the backrooms to bring us samples of their 21yo! Despite its years, this dram was still surprisingly light and whilst it had a good nose and those sherry-like fruity and sweet flavours were still present, it didn’t quite meet the standard that the 15yo had set. With our conversation starting to wind down and the 25yo or older expressions remaining firmly locked away for the evening (we tried) we were fully sated and couldn’t leave without making a purchase or four…

By the time it came for us to leave, we realised that the staff had actually kept us indoors well after their closing time and were still happy to talk (mostly). Their head honcho however was starting to purposefully look at his watch and with our purchases having already been made before they had to close the till, we were also ready to head off and set ourselves up for the long weekend at the cottage. With some parting pleasantries and a few snaps, so ended a brief but memorable trip to Glenfarclas. If you get the chance to go, then you should definitely do it! We certainly will. Again. And again.