Only a few months ago, I posted on here about one of my heroes, Mr Ian Fraser Kilmister. If you have read that post (and click here if not), then you will note the effect that he and Motorhead have had on me, along with the lives of many, many others. I therefore felt it right to hold off for a while, let it sink in and try and write something to honour the man who lived to become a legend in his own time, and, given the torrent of tributes that have been made since his passing on 28th December 2015, it is clear to see that this opinion is widely shared.

Whilst I personally think that too many people and businesses seem to have disingenuously jumped on the bandwagon, I believe that Lemmy deserves all of the praise and attention that he can get, and all of the heartfelt messages, tweets and tributes worldwide have certainly been testament to the man. Let’s face it, he reached 70 years old! Plus, he did it with THAT attitude and THAT lifestyle, which proves, if nothing else, that he was made of sterner stuff!

When I heard the news, there was only one way that I thought appropriate to pay my respects, and that was to take out the Classic Album Selection and listen through Overkill, Bomber, Ace of Spades, No Sleep ’til Hammersmith, Iron Fist and Another Perfect Day, whilst supping on ol’ Lem’s favourite, Jack and Coke.

Personally, the Overkill album has always been my go-to Motorhead album. On reflection, I don’t think that I’ve gone more than a week or two without a copy of Overkill being near me in some form or other, since the day that I first heard it. It has always been on high rotation in the car, and has seldom left the glovebox – nothing can get you through a journey or even traffic jam like a blast of Lemmy and co. To me, the album neatly summed up what Lemmy and Motorhead was all about: no-nonsense, fast-paced, and in-your-face rock and roll. The fact that the title track “ends” three times also well represents the man’s wicked sense of humour and if you throw into the mix that they were the “loudest band on the planet” – what’s not to love? I mean that album is cited as the reason that Metallica even got together in the first place!

[Incidentally, the album closer Limb From Limb is probably my favourite Motorhead track and is often overlooked from the album as it sits at the tail-end of some absolute greats – 7  out of 10 of which ended up on their greatest hits album!]

Not one to go out quietly, the rock and metal community came together to pay their respects via a 12 hour block of memorial services at Lemmy’s favourite stop-off The Rainbow, which allowed the world to look in by streaming the event via YouTube.

Whilst dwelling on events, I managed to cast my mind back to a late and sweaty night years ago in a bar in Cardiff, where I heard a guy ask the bartender for a “Lemmy”, and, without question, a jack and coke was served. It seems fitting then that, following Mr Kilmister’s passing, a twitter and facebook campaign was launched with the hashtag #gimmealemmy [maybe by that same guy?] to go onto change.org  to rename the infamous jack and coke to being simply called a “lemmy”. Currently 45,000 strong at the time of writing, it seems that the industry in fact listened and even saw Food & Beverage magazine publish such with their recipe below (i.e. add bitters). 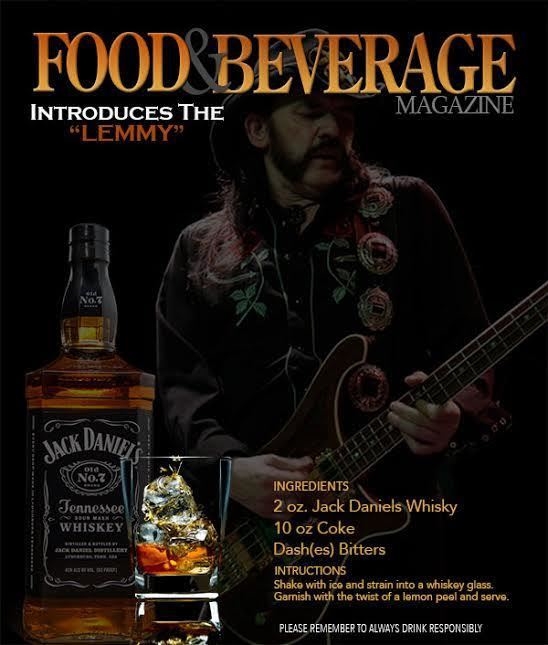 Whilst I’m not usually one for these kinds of petitions, it is just another example of the notoriety that one of rock and roll’s finest garnered with that most infamous of spirit and mixer combos. A similar campaign was also launched to name one of the newly discovered chemical elements “Lemmium” (which just happens to be a heavy metal), and that petition currently stands at a giant 154,000 votes. Another campaign actually saw the Ace of Spades single reach #13 in the UK charts within a week of his death.

Speaking of his music, last year’s Bad Magic album release celebrated 40 years of Motorhead, and if that wasn’t enough to celebrate the feat, Jack Daniels themselves had prepared a single barrel expression, which (naturally) sold out instantly. Call it timely marketing or call it a fitting tribute, there is a lot of love for Lemmy out there, particularly in liquid form, and what better way than with a whisky? Not to mention the constantly sold-out bottles of Motorhead-branded shiraz and Bastard lager.

In 2015 it was well documented that Lemmy was advised to give up his staple JD and coke for health reasons and instead he replaced it with the vitamin C-rich but equally potent vodka and orange juice. However, in the wake of his departure it was reported from Finland that he had always renounced one drink in particular…

The video may display his later physically frailty but still shows that its the same old Lem beneath and that final wry smile sums it all up for me and is a fitting tribute.

The final death certificate revealed that Lemmy had suffered from an aggressive cancer along with cardiac arrhythmia and congestive heart failure, so it did take a whole lot of serious trouble to take the great man down, and with this as his mantra, I’m not surprised:

I got rock ‘n’ roll, it satisfies my soul
And if that’s all there is, it ain’t so bad

So, with this in mind, I will continue to crank up the volume and raise a glass to the man who really put the Jack into being rock and roll’s “Jack the lad”

One thought on “Lemmy – Rest In Peace”