Today is April 23rd, a.k.a. St. George’s Day, the national day of England, and so it seems an appropriate day to publish a post about the English Whisky Co. (EWC). The coincidences don’t stop there, because their site is actually called the St. George’s Distillery in Roudham, Norfolk.

Though the St. George branding and name has since disappeared from the EWC wares following some disputes with a Californian namesake, the distillery’s image has been updated since 2016 in line with what was their unique selling point to begin with: being English. When the distillery opened in 2006, it was the only active whisky distillery in the country, and the first to fire up its English stills (legally) in over 120 years, which has then opened up the path for many others to follow. The growth of the distillery has not just been documented by many publications but also by the whisky output itself, via their “Chapter” releases – each whisky demonstrating the maturation of their spirit through time and constituting a ‘chapter’ in their story.

Previously, we’ve looked at their first widely available single malt from that range, Chapter 6, and their new flagship malt, The English, but for the purpose of this post, we take look at three of those chapters side-by-side: Chapters 10, 11 and 12, so as to see how that development progressed towards the spirit that is available today.

Looking first at Chapter 10 in its own right, this whisky was matured in Olorosso sherry casks for nearly 5 years, and has been bottled at 46% ABV.

There’s quite a fresh attack on the nostrils to begin with, but once it subsides there is a wave of delicious sweet flavours like milk chocolate and caramel, backed by a good malted barley scent. Beneath it all there seems to be a strong spicy note (like cloves), which suggests that things are gonna soon hot up here.

Well, the spice can wait its turn as its a barley and sherry tag team of flavours at the fore, and they’re throwing 1-2 punches between them. Malt meets dried fruit flavours, delivering them both in spades.

To quote Ron Burgundy: “it’s a deep burn”. There is a boozy firey burn that just builds and builds and fills the chest. The lasting flavour is that of Christmas cake – and a boozy one at that. Dried fruits, crumbly cake and warming spices all leaving their mark.

It should be made make clear from the off that these numbers are not the age statements of the whisky, but the chapter instalments on the EWC story. From tasting this whisky I can now start to appreciate that story as this dram is all about potential. It has got that core base malt at its heart. On its own, it tastes too young and volatile to me – I can only imagine what the cask strength release would have been like! The alcohol really takes hold and overpowers those great underlying flavours. In terms of progression though, particularly thinking back to the Chapter 6 malt and considering the effects of the sherry cask maturation, this instalment represents a real page-turner. 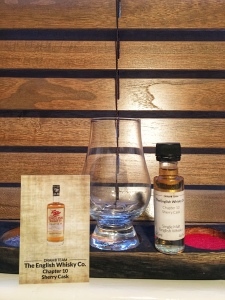 Next up is Chapter 11, and whilst Chapter 8 was their first “peated expression”, followed by the readily available Chapter 9 (see notes here), this Chapter 11 represents EWC’s first “heavily” release. This whisky was bottled at just over 3 years old and available at cask strength or this, the more regulated 46% ABV.

Oh yes it is indeed heavily peated! Its quite the phenolic/iodine style of peat too – more like what you’d get from the Scottish islands – and it is the peat doing the hard work here with the malt and booze taking a backseat. There is also a gentle soft, heathery floral note sitting even further back in the profile (presumably in the boot in this car analogy).

It is all about the peat on the tongue too – though it is the ester-y and earth-y notes from peat that you experience here, rather than the actual smoke element. The barley sugar from the nose is more prevalent and there’s a gentle oak spice to the final tastes. That sweet and heathery set of notes underline the whole thing too – combined they made me think of parma violet sweets hiding under all of that peat.

Sure enough, its those heady phenolic peat notes that dominate on the finish.

Well, you can’t deny that this young thing hits the brief of “heavily peated” as it is the main character to the whisky, but there are some good supporting roles too. I think the youth of the whisky plays to its advantage here with the more medicinal notes being pushed by the young, fiesty spirit. I could get on board with this whisky as is, but am still keen to find out how the plot continues for the peat character in the EWC story. 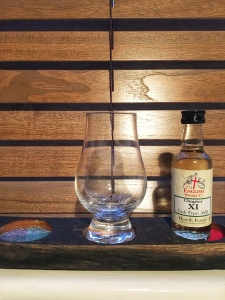 It seems that the cask has imparted its damp, dark and old oak origins into the young spirit. There’s also a distinct set of sweet sherry notes (raisins, oranges, and cherries) and a slight astringent quality to the boozy nose prickle. Overall there is quite a cake-y smell to it too.

The description says unpeated, but there is quite an earthy initial taste to this – though no smoke. The sherry flavours from the nose are there, but seem quite muted – the sherry influence seems to be imparting more of the spice elements (ginger and cinnamon) rather than the fruity notes.

There’s a nice body to this and it leaves a very warming sensation as the flavours close out. The chest once again gets heated up and the young spirit and spice are playing their hands alternately. Unfortunately, there seems to be something of a chemical aftertaste to it, despite the rounded body.

I’m just not sure about this one. It seems to buck the trend of the concept of development between the Chapters. This may be running in to the compare and contrast part intended for below, but it just seems to under perform. I know that the flavours are totally at the master distiller’s discretion and the release is their prerogative though. I’d also be interested in knowing the age of this one, as it wasn’t made clear, to see if it is a like for like comparison with Chapter 10. Maybe I just prefer an Olorosso maturation to a Pedro Ximenez one?

So how did they compare to one another?

Well, it does sort of seem like comparing apples and oranges, when comparing peated to unpeated whiskies, but the consistent element across all 3 releases was the base malt and it certainly provided a solid backbone to each of the Chapters. Given to me blind, I’m not sure that I would have been able to tell you that they were from the same distillery though! Maybe that’s more to do with the peat, or my relative inexperience, but it is interesting however that each expression made for very different taste sensations despite their youth. To me, that just displays the importance of cask choice on a spirit – very prevalent at such a young age. The colour of each whisky was testament to that level of variety too.

I think the takeaway point here is that the numbering system is not an indication of age or development of malts, but rather a series of experiments by the distillers to find their house style and what works best. With hindsight, what else could it have been? Those different casks being used and the frequency of the output. Luckily, the consistent young age (3-4 years) between the whiskies made for a useful comparison tool for this whisky nerd to discover the importance of cask influence. The prospect of the numbering will also clearly tantalise the whisky collector and completist. I’m certainly tempted to try as many of the Chapters as I can – though they are now few and far between! (Though one look at the EWC website and you can see that their experiments in cask influence are still underway, just under the “The English” or “The Norfolk” brands)

In conclusion, across all 3 Chapters (and the others that I’ve tasted) there was a high quality malt acting as the backbone to each expression, which seems to be now form the EWC signature, culminating in their flagship The English whiskies – both Original and Peated.M

Sample Disclosure: Chapter 10 sample courtesy of The Dram Team subscription. Chapters 11 and 12, bought directly from EWC. All samples therefore bought by WhiskyUnplugged and all notes are intended as an honest, independent and fair review of the whiskies. This is not intended as a promotion, and, as always, please drink responsibly.