We love the idea of a speakeasy. So imagine how much we liked the idea of a whiskey named after a series of crypts underneath the Christ Church cathedral in Dublin, which were reputed as subterranean drinking dens. Quintessential Brands tells us that this 16 year old single malt Irish whiskey being sold under the Dublin Liberties brand was therefore named after the cellar keepers which kept their own casks and coins, to protect the secrecy of their wares. Marketing aside, when you get down to brass tacks, this is a single malt, triple-distilled, Irish whiskey made from 100% Irish malt. The spirit has been matured in first-fill bourbon casks and then finished in Pedro Ximenez sherry casks, prior to bottling. The final spirit is captured at 46% ABV and will set you back €320 at its RRP. 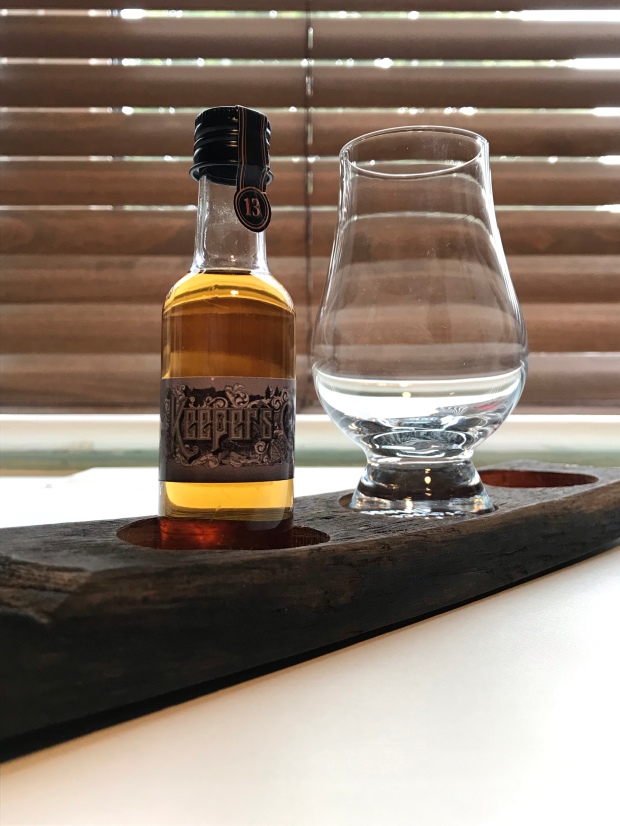 This delivers up a really syrupy sweet bourbon-like nose to begin with – corn syrup springs to mind, in fact. With a floral twist. Other mellifluous flavours like honeycomb and fudge jump out too. The 46% ABV seems to be well masked under this scintillating sugary shroud…

The sweet flavours all continue through from the initial nosing but now that initial floral note seems to have been dialled up to a fuller, fruitier flavour – more in the vein of cooked fruit desserts come to think of it – think poached pears and apple pie (crusts and all).

The finish is both peppery and oaky in equal measure and demonstrates a bit of a kick that the other softer smells and tastes did not really indicate early on -although the 16yo age should have given it away! There’s a lingering sweetness to it but with maybe a little metallic aftertaste too. The young oak and malt really make themselves known and remind you of this whiskey’s origins.

An interesting, sweet and tempered pick and mix of Irish Whiskey profiles and flavours here. It seems to bridge the gap between Pot Still and Malt whiskies without committing to either and without compromising the merits of each. Delicious flavours are at play that have both the depth of malt and the delicacy of triple distilled Irish whiskey. Does this justify a €320 price tag though? Err… No. Sorry to say but, as subjective as whiskey tasting is, that seems to be an eye watering price for what it is, or any 16yo whiskey for that matter. Just to put that into context, I could actually fly to Dublin from the UK, visit the distillery, do a tour, have some food and a few drinks, stay the night and then fly back for that figure or less. Based on price alone, this seems like a case of style over substance and a marketing/pricing team that have gotten far too carried away with themselves. Don’t get me wrong, the Keeper’s Coin is a nice whiskey – just look at the tasting notes above – but you’d really have to buy into the history and the brand to be that excited about this. I know that a lot of time and effort has gone into making this, and the mystery whiskey source and the new distillery need to cover their costs, but, for all the medals won for the whiskey itself, that cost is just too distracting and prohibitive to justify itself (it has certainly taken up the majority of this final verdict). You may think otherwise. In fact, some of you clearly do! It’s definitely selling! We were not surprised therefore to see that the Dublin Liberties King of Hell release, a 27yo single malt in the same range of whiskies (again, from an undisclosed source), retails at €2,700 – a cool €100 for each year it has been around – and it’s sold out! I guess this proves that the right price is whatever people are willing to pay for it, though, for me, these prices will prevent the average consumer from partaking. If this was €32 per bottle, I’d snap it up in a heartbeat, but certainly would not pay 10 times that. lovely whiskey, but you’d need the Keeper’s Coin to pay for it!

Sample disclosure: This sample was provided as part of a promotional Tweet Tasting event for The Dublin Liberties, arranges by Steve Rush of The Whisky Wire. All notes are intended however as a fair, honest and independent review of the whiskey itself.